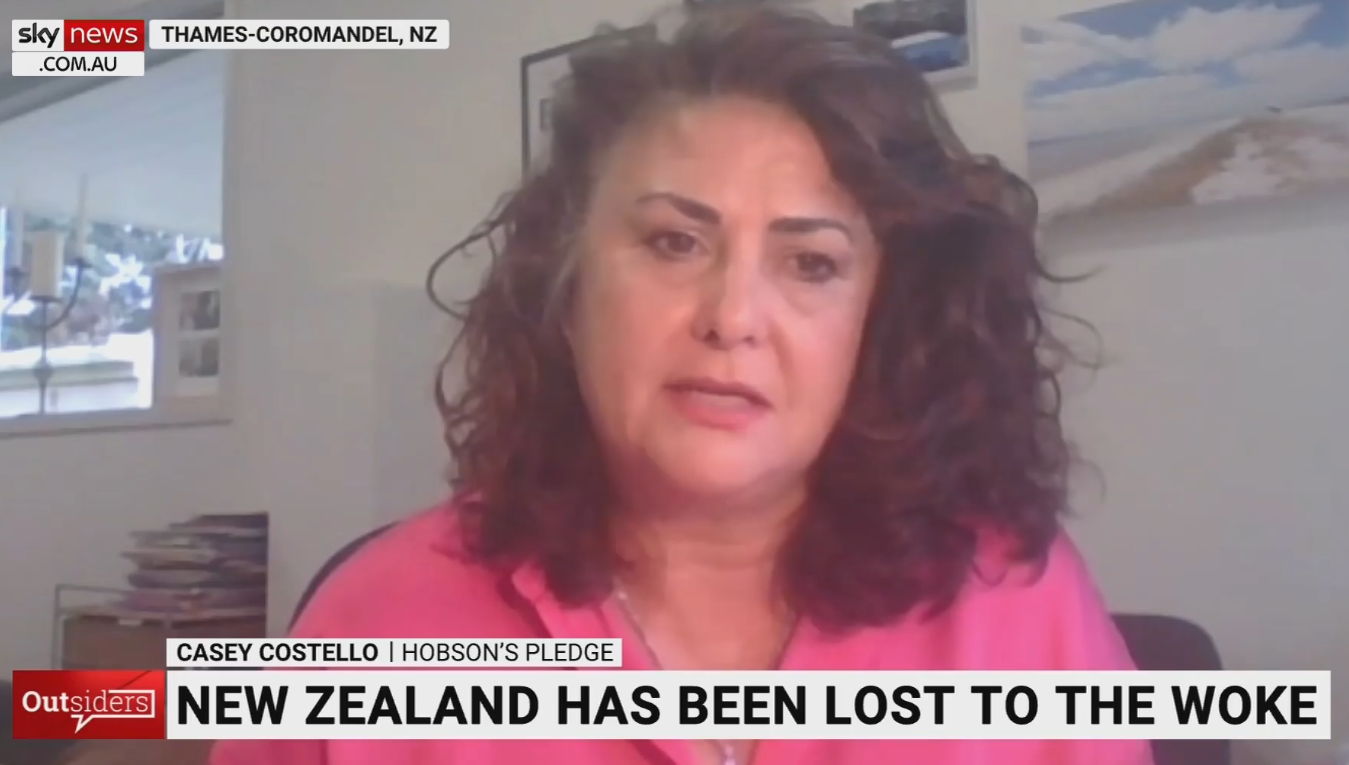 In an interview broadcast in Australia at the weekend, the Outsider programme on Sky News asked Casey Costello of Hobson’s Pledge whether it was correct that Maori bodies are “taking control of large swathes of New Zealand life and assets”.

Ms Costello agreed, saying that “this appears particularly in the undermining of the democratic process”.

“It’s predicated on the idea that all Maori think alike, that they all have this idea of self-determination,” she said.

“But what we’ve actually created is a Maori elite and their relevance relies on Maori victimhood,” she said.

Views that challenge New Zealand’s racist orthodoxy apparently are not permitted in most of New Zealand’s tightly controlled media.

Like Hobson’s Pledge, a centre-right think tank named the New Zealand Centre for Political Research was increasingly black-listed until founder Muriel Newman was interviewed by Andrew Bolt of Sky News at https://www.youtube.com/watch?v=qq17gKFAds4.

That leakage of not-permitted views into the New Zealand “conversation” prompted NewsHub to try to discredit Mrs Newman’s views via a so-called “fact-checking piece at Fact check. (Disregard the video clip there of Maori Development Minister Willie Jackson)

Censorship and smear look like the current game plan of the New Zealand media. It looks like the only way to maintain freedom of speech in New Zealand is to smuggle out messages to Australia and have them broadcast back to us.

Letter to PM, radio adverts pick up the pace

The generosity of a great many of you has enabled us to widen our outreach. Many thanks.

In that advert, Hobson’s Pledge founder Don Brash says “there might be Three Waters, but there should be only one people” and urges everyone to “sign our letter to the Prime Minister now at hobsonspledge.nz”  .

The message to sign our letter to the Prime Minister opposing iwi co-governance built into the Three Waters Plan will be promoted on nine social media platforms.

Similarly, our petition calling on the Prime Minister to delete any reference in official communication to any name for our nation other than New Zealand will be promoted on these platforms. Currently,our Aotearoa petition is advertised on 13 large commercial billboards in Auckland, Wellington, and Christchurch,

Meanwhile, we have collected more than 21,000 signatures on a petition against the He Puapua plan for two governments in New Zealand, one by Maori for Maori and the other, a fully bi-cultural version of what we already have. Click here to sign  Reject co-governance  and like and share the petition page.

The Government is changing the health system because it has poor outcomes for Maori, because the system does not operate in partnership and does not meet the Crown’s obligations under the Treaty of Waitangi, according to an explanatory note attached to the Pae Ora (Healthy Futures) Bill.

The Pae Ora (Healthy Futures) Bill, that was introduced into Parliament on October 20, 2021, and passed its first reading on October 27, will replace the New Zealand Health and Disability Act 2000 and will take effect in July next year.

In a piece titled Racially charged healthcare, former Labour Health Minister Michael Bassett observed that the Bill deals “almost exclusively with Maori health. Maori are mentioned in most clauses of the legislation”.

“The health of 17% of the population seems to be the only concern of this government. Pacific Islanders get a look-in briefly, the Minister being required to produce a specific strategy for their health.

“But all the rest of us who make up 70% of the people are never mentioned, and are dismissed at one point as “the other populations”, Dr Bassett wrote.

Submissions which close on December 9 may be made at https://www.parliament.nz/en/pb/sc/make-a-submission/document/53SCPOL_SCF_BILL_116317/pae-ora-healthy-futures-bill

Our petition which asks Parliament to amend the Marine and Coastal Area (Takutai Moana) Act 2011 to restore public ownership of the coastal area, put all claims through the High Court, and repeal customary marine title, while affirming customary rights, has picked up more than 46,000 signatures. We need your support. The petition may be signed at https://www.change.org/beaches4all