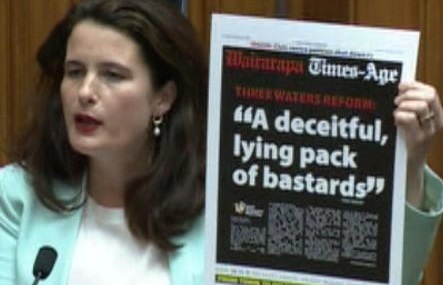 Thank you for massively supporting last week’s appeal to counter the Ardern Government’s plan to force councils to transfer all infrastructure for fresh, storm, and waste water into four massive unwieldy zones. This is a fight we think we can win.

“We” means farmers throughout New Zealand, 43 of 67 councils, the ACT and National parties, a huge number of voters and taxpayers, as well as Hobson’s Pledge supporters.

The Three Waters proposal fails on numerous grounds. No regard has been given to communities of interest, local democracy, or catchments. The prospect of having our water managed by a multi-tiered bureaucracy with an office hundreds of kilometres away is daunting.

Our focus for Hobson’s Pledge is on the iwi partnership aspect, because this brings an unmandated transfer of the democratic control of an essential public resource to unaccountable private sector Maori corporations.

The 12-seat boards running these four monopolies will have an equal representation from local government and Maori tribes, with a 75 percent majority required for any decision.

Six seats on a 12-seat board suits a single tribe, Ngai Tahu, which claims most of the South Island as its traditional area, because one tribe will take all six seats.

But with at least 80 iwi groups involved in treaty settlements (See Unintended consequences of treaty settlements) and with only 18 seats available on the Three Waters boards other than the Ngai Tahu seats, there will be squabbling from the more than 60 tribes who miss out.

The Three Waters plan is a step too far for most voters and, given the reaction that has occurred since the Wednesday announcement, may become the point at which we turn against the Government.

The headline pictured above, when the Wairarapa Times Age captured the rage of a councillor who called the Government “a deceitful lying pack of bastards”, is unprecedented.

The deception by Government in the Three Waters process means no promise or assurance they offer can be trusted.

It looks like Local Government Minister Nanaia Mahuta’s had already decided to push the plan through regardless of whatever local councils thought of the idea.

Consultation with councils was window-dressing and Mahuta’s attempt at reassurance, in stating that ratepayers will be better off, cannot be believed.

Advertisements for Three Waters staff, and water services vehicles with Three Waters signwriting on them, appeared before her announcement last Wednesday, that councils would not be able to opt out of the plan.

The Three Waters plan is being be rolled out under cover of Covid-19.

There will be legislation and there will be a select committee process, which will be a farce – just as it was when Maori ward petition rights were abolished.

Nevertheless, it will be crucially important that you express your outrage in making a brief submission when the time comes, otherwise the Government will claim their silence as approval.

There is the next Groundswell NZ nationwide protest, which will be held on Sunday, November 21. Go here https://groundswellnz.co.nz/events/ to contact your local co-ordinator.

Put signs on your vehicle and join the protest. The signs could read “No Three Waters, no tribal rule”.

You could contact your MP, write a letter to your newspaper, or phone in to talkback radio.

If you are in any doubt that a slow-moving coup orchestrated by our Prime Minister is under way in New Zealand, see https://www.nzcpr.com/a-slow-moving-coup/

The Three Waters plan implements bicultural governance of water infrastructure, and looks like He Puapua in action.

He Puapua is an overarching plan for two governments in New Zealand, one for Maori by Maori, and the other, a fully “bicultural” version of what we already have, with both governments monitored by a tribal committee.

In May, the Government denied that it was government policy (See Nothing to hide).

However, consultation with Maori groups over He Puapua took place two weeks ago when Maori Development Minister Willie Jackson met more than 30 national Maori organisations in an online meeting. (See Iwi consulted on He Puapua)

France went colour-blind and so can we

You may not know that France maintains a “colour-blind” model of public policy that targets virtually no policies directly at racial or ethnic groups and instead uses geographic or class criteria to address social inequality. (See Race policy in France)

This is unlike the United States, Britain, the Netherlands, and of course New Zealand.

Demographic information for France distinguishes between French citizens and those without French citizenship. Immigrants are classified according to country of origin.

We want New Zealand to follow the French lead and remove race from legislation so that everyone is treated as equals under the law and support is provided on the basis of need not race.

Removing all references to “Treaty partner” or “Maori” from legislation would eradicate the racist component of Three Waters, as well as the Maori health authority, the two-governments He Puapua plan, Maori seats in central and local government, “Maori negative social indicators”, allegations that the police are picking on Maori, and all race-based policies. 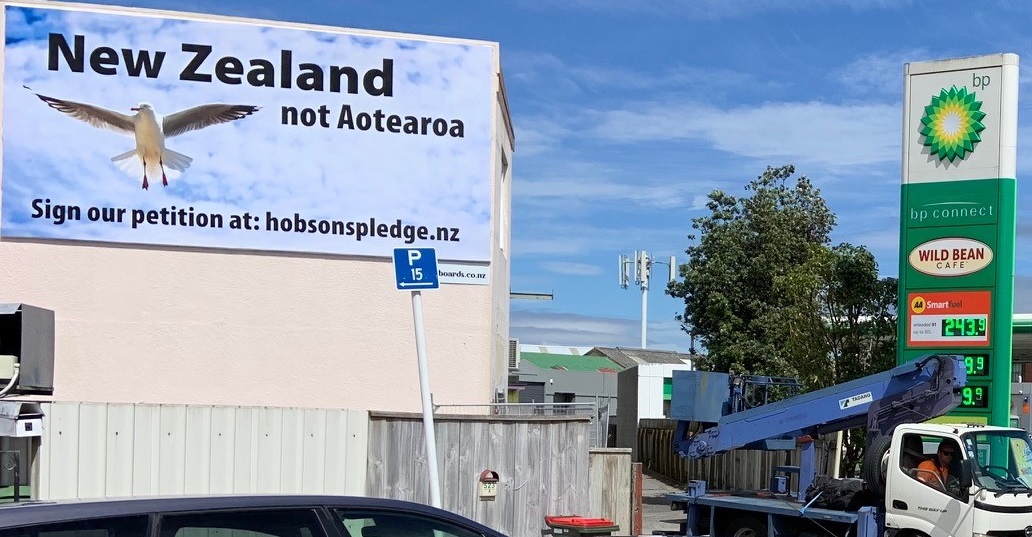 One of the 13 billboards we put up, this one at Melling in Lower Hutt.

Thirteen billboards in Auckland, Wellington, and Christchurch have prompted allegations of racism and demands to have them removed. We live in strange times when questioning the change of our country’s name without a democratic process is deemed racist. Our petition calling on the Prime Minister to delete any reference in official communication to any name for our nation other than New Zealand has gathered more than 21,000 signatures.

Our petition which asks Parliament to amend the Marine and Coastal Area (Takutai Moana) Act 2011 to restore public ownership of the coastal area, put all claims through the High Court, and repeal customary marine title, while affirming customary rights, has picked up more than 45,600 signatures. We need your support. The petition may be signed at https://www.change.org/beaches4all

With the mainstream media effectively silenced by Labour’s cash-for-advocacy policy, it’s now up to every New Zealander to alert others about what’s going on. Please share this message with your friends. Ask your friends to sign the petitions.To share this message on social media, please use this url https://www.hobsonspledge.nz/