The unintended consequences of treaty settlements 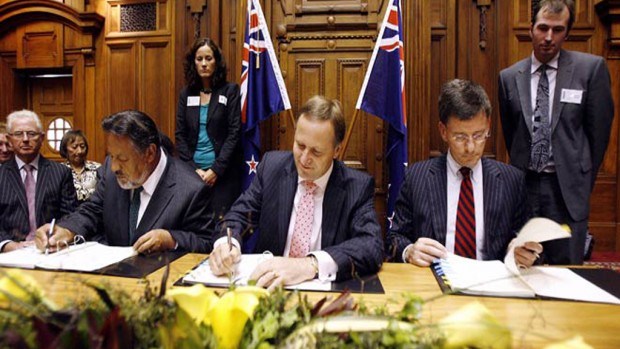 However, of the 79 settlements detailed below, which totalled $4.3-billion to December 31, 2019, fewer than half involve land confiscation which only occurred in Taranaki, Waikato, the Bay of Plenty, and some areas in Gisborne and northern Hawke’s Bay.

Treaty breaches alleged by the remaining claimant groups are mainly to do with the sale of land, with claimants wanting more money. Confiscation claimants also complained about land sales in their areas.

Although confiscations were highly contentious at the time, with substantial opposition in Parliament, they were nevertheless legally carried out under the New Zealand Settlements Act 1863.

Those of us living in the relative peace and security of the 21st century often overlook the fact that 19th century settlers were fighting a war they could not afford to lose and the threat of land confiscation had a real impact on which side tribes chose to support.

Another overlooked fact is that the total financial amount involved in each settlement, referred to as the “quantum”, is calculated by following a simple formula which is mainly to do with the land area the tribe claimed to own in 1840 and the number of tribe members today. (1)

Under that formula, the tribe that claimed the biggest land area in 1840 and the most registered members today would expect to get the biggest pay-out. Another assumption is that every claimant group should expect a pay-out.

The divisive process of Treaty settlements began more than 30 years ago, when a Labour Government made the highly unusual decision to commission a seven-member tribunal to settle all Maori grievances back to February 6, 1840, the date the Treaty of Waitangi was signed.

Maori Affairs Minister Koro Wetere said this was to address “the mounting tension in the community that springs from the sense of injustice that is harboured about the grievances that are outstanding”. (2)

There was a row over how much this was going to cost. The Bolger National Government proposed a cap of $1 billion, calling it a “fiscal envelope”. Tribes objected and the cap was dropped in 1996.

Nevertheless, the two big tribes that had settled early negotiated into their settlements a clause that entitled them to a proportion of all settlements over $1 billion in 1992 dollars.

Waikato-Tainui would get 17 percent of all future treaty settlements and Ngai Tahu 16.1 percent. Top-ups started in June of 2012, when the $1 billion mark (in 1994 dollars) was reached.

The amounts of these ongoing top-ups are not reported by the Government, although they can be found in the annual financial reports of both tribes. The total amount of these top-ups, as detailed in the table below, is $543.8 million, which is substantially more than both tribes received in their 1990s settlements.

The process is explained in detail in the “red book” titled Healing the past, building a future, which is published by the Office of Treaty Settlements. (3)

Of course, the promise of cash brought a flood of grievances. A total of 2034 claims were registered by September 1, 2008, the deadline for historical claims. This compared with just nine grievances a delegation of chiefs took to Queen Victoria in 1882.

Investigation of grievances has a long history with investigations by land sale commissioners in the 1840s, confiscation compensation commissions in the 1860s, the Native Land Commission in 1920, and others.

A number of claims have been settled a number of times. For instance, Ngai Tahu’s $170 million settlement in 1998 was the fifth settlement originally generated by a single complaint to do with the tribe’s sale of 20 million acres in 1848, known as the Kemp purchase. The complaint was about reserves not being marked out.

Both the Treaty settlement policy and process ignore basic assumptions we have about our democratic system.

Democracy is based on the idea that everyone should have equal rights and participate in making important decisions.

At no stage has the New Zealand public been given any say in the increasingly expensive policy of paying cash compensation for events that occurred up to 178 years ago.

The Treaty settlement process circumvents our democratic processes. Once a settlement is signed, the agreement becomes legally binding and legislation to implement the settlement is merely a rubber-stamping exercise.

Groups created through the settlement process, which are known as post settlement governance entities, benefit from the system without being required to contribute.

Amendments to the Charities Act meant that from April 1, 2003, any organisation that administers a marae situated on a Maori reservation may qualify for an income tax exemption as a charity. These tax-exempt tribal entities don’t contribute to the government coffers that provided their seed capital.

These groups have regular meetings with the Prime Minister, have been granted co-governance rights on a number of councils, are demanding the right to control water, and expect to help determine resource consents under the proposed iwi clauses in the Resource Management Act.

Settlement deals include rights of first refusal to surplus Crown properties (for up to 176 years), statutory acknowledgements of interest in streams, rivers, lakes, mountains, and scenic areas, geographic place name changes, and co-governance arrangements with local bodies. These arrangements entrench race-based co-governance for years to come.

The financial redress of the 79 settlements detailed below were compiled from details on the Office of Treaty Settlements website and include claimant group, date of settlement, and dollar value to December 31, 2019.

Each settlement includes financial redress (cash and/or property), rights of first refusal on the purchase of properties within the claim area, cultural redress, and co-governance arrangements.

* The relativity clauses in the settlements of both Waikato-Tainui and Ngai Tahu transform, for those two tribes, an additional settlement of historical grievances to a gift that keeps on giving. The clauses mean that both tribes can make a request for payment every five years ensure that the value of their settlement remains relative to the total value of all Treaty settlements – which is 17 percent for Waikato-Tainui and 16.1 percent for Ngai Tahu. Bear in mind that conflicting information exists about these payments.

*Central North Island Forests Iwi Collective also received $223-million in forest rentals held in trust since 1989. That is not included in the financial redress total because it was regarded as tribal money from 1989.

* By mid-2013, bad investments and bailouts were blamed for wiping out almost half the value off Taupo tribe Tuwharetoa’s $66-million share of the 2008 “Treelord’s” settlement.

*Waikato River. The Office of Treaty Settlements argues that this is not historical redress and so should not be included in the settlement total. This is despite the fact that the settlement is named the “Waikato-Tainui Raupatu Claims (Waikato River) Settlement where “raupatu” means “confiscation”. The $211.8-million total includes all payments for 27 years. A total of $130.8-million was paid up front.

2.Healing the past, building a future. https://www.govt.nz/assets/Documents/Red-Book-Healing-the-past-building-a-future.pdf