Maori Party wants to save us from statues 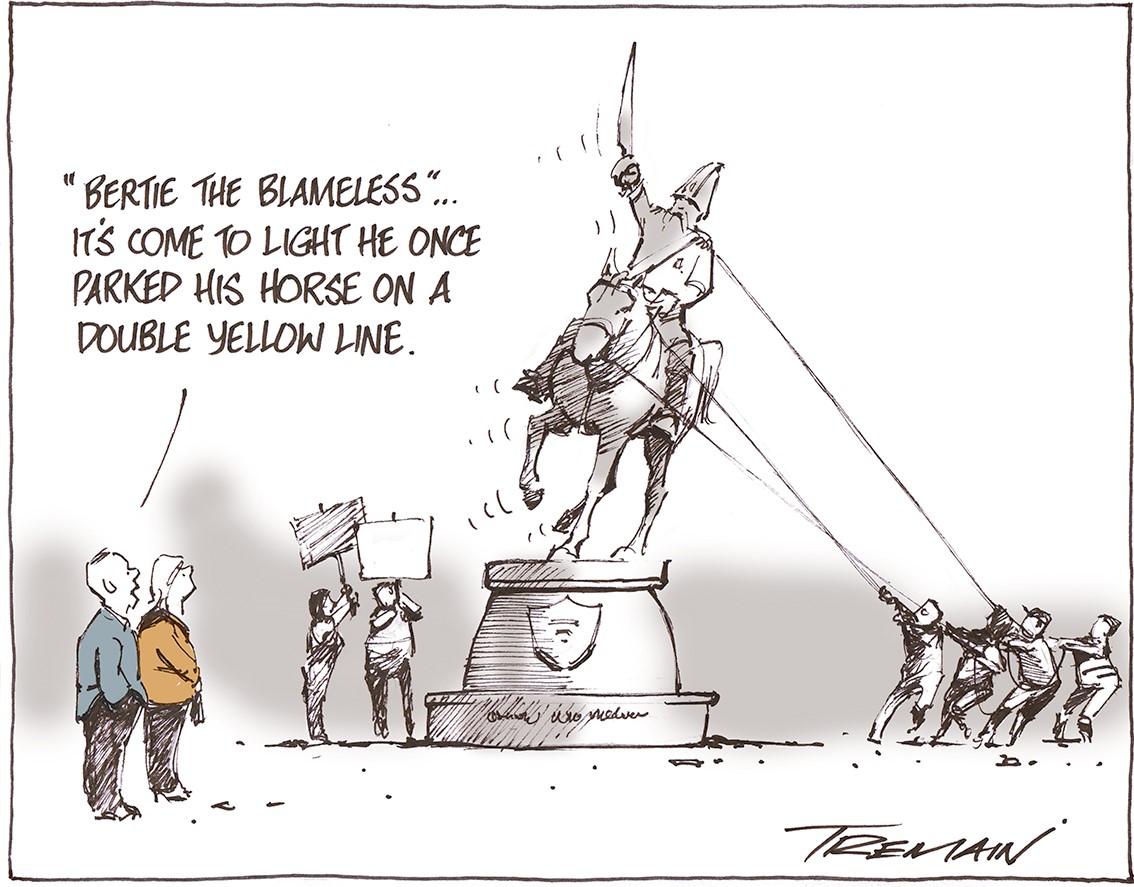 The cartoon above, courtesy of Garrick Tremain, shows the absurdity of the Maori Party’s attempt to win support, that is by having councils investigate and remove colonial statues.

Her calls follow a movement that originated in the United States where anti-racism protesters target and tear down old statues.

Unfortunately for the Maori Party’s bid for support, a poll by Newshub shows 82 percent opposition to a war on statues. See https://www.newshub.co.nz/home/new-zealand/2020/06/poll-should-new-zealand-pull-down-statues-memorialising-colonial-figures.html?fbclid=IwAR1Nkv0EvL5tOdSKFo9JQhbsk37pVahMsbWvfS-V5diNvKQA_Z8ZufxIIA8

Repeated threats by a radical from Huntly prompted the Hamilton City Council to remove a statue of Captain John Fane Charles Hamilton​ from Civic Square on Friday.

Hamilton was a naval commander who was killed while leading a detachment of the 43rd regiment at the Battle of Gate Pa in Tauranga in 1864. The statue had been given to the council for the people of Hamilton by the Gallagher Group, a technology manufacturer based there.

After the statue of Captain Hamilton was removed, a spokesperson for the Maori King, Rahui Papa, said he thought the name needed to be “changed back to Kirikiriroa”, which was the name of a pre-colonial settlement on the west bank of the Waikato.

Papa was involved with conveying to impressionable high school pupils the demonstrably false story that in 1864 colonial troops herded women and children into a church at Rangiaowhia and burnt them to death. See  https://www.hobsonspledge.nz/the_burnt_church_lie_that_won_t_die

That bit of propagandizing led to a petition which resulted in New Zealand Land Wars Day, echoing Waitangi Day as a national grievance day.

The name of Hamilton city was under attack two years ago when former Hamilton mayor Andrew King suggested a change to Kirikiriroa City Council to placate local iwi. A storm of hostility erupted.

You may share your views on names with the current mayor, Paula Southgate, by emailing her at [email protected]

Maori Council spokesman Matthew Tukaki fired up on Wednesday, June 10, over the legality of iwi checkpoints during the COVID-19 lockdown, describing MPs as "a bunch of baboons".

Tukaki, a member of the Maori Council executive, appeared before the Finance and Expenditure Committee where he accused MPs of "politicking" over whether or not the iwi checkpoints were legal.

ACT leader David Seymour accepted Tukaki's concerns but took issue with his language. Tukaki did not apologise for the remark and indicated that it was directed at Seymour.

Seymour told Newshub he thought Tukaki had apologised. "If he didn't, that is classic man-child behaviour," he said. "Maori need adults in the room." See https://www.newshub.co.nz/home/politics/2020/06/bunch-of-baboons-m-ori-council-boss-matthew-tutaki-fires-up-at-mps-over-iwi-checkpoints.html

In an earlier rant, Tukaki referred to a Western Bay of Plenty councillor who he did not like as a “crow” and a “hag”.

His manner is a far cry from the dignified professionalism that characterised earlier incarnations of the Maori Council and we would have to question what the other executive members or the Council’s chair Sir Eddie Durie would make of his increasingly unhinged rants while he purports to be the head of the Maori Council.

Allegations that a Napier Treaty group made a “secret deal” with the Crown, failed to disclose accounts to hapu, did not hold elections as required in 2013, 2014, and 2015, and took out a large loan without informing members, will form part of a hearing in Napier tomorrow (Monday, June 15).

The hearing of Parliament's Maori Affairs Select Committee, at the Napier War Memorial Centre on Monday afternoon, stems from opposition to the $19 million Ahuriri Hapu Claims Settlement Bill which is waiting to be passed into law. See https://www.nzherald.co.nz/premium/news/article.cfm?c_id=1504669&objectid=12339423

On the issue of Treaty settlements, you may be surprised to know that the total financial redress of 79 settlements detailed on the Office of Treaty Settlements was $4.3-billion to December 31, 2019. See https://www.hobsonspledge.nz/unintended_consequences_of_treaty_settlements

You may also be surprised to find out that the architect of Treaty settlements, Sir Geoffrey Palmer, wrote that around the time he amended the Treaty of Waitangi Act to allow claims back to 1840, he “did some research on the outstanding grievances and it did not appear that looking into them would open a can of worms, which many feared. I took the view that the claims may take a decade to deal with, that it would cause some anguish but would be worth it in the end.”

Here we are 35 years later and the claims process has years, perhaps decades, to run.

Our petition which asks Parliament to amend the Marine and Coastal Area (Takutai Moana) Act 2011 to restore public ownership of the coastal area, put all claims through the High Court, and repeal customary marine title, while affirming customary rights has picked up 23,258 signatures. We need your support. The petition may be signed at https://www.change.org/beaches4all Even if you have signed, you may follow the link to ask your social media friends.

Our petition for the Government to allow both Te Kawerau a Maki and Fletchers to proceed with their lawful business, has collected 3017 signatures. If you have not done so already, please sign our petition at  http://chng.it/xPN6P55k