Ross Meurant: APARTHEID IN NEW ZEALAND. If I must go to jail for saying this; then so it be.

In 1981 I was one who literally fought to protect the rights of Kiwis who wanted to exercise their lawful right to attend rugby games and not have their travel disrupted by protestors who disregarded the rights of fellow Kiwis in their quest to fight Apartheid in another country.

Today, I find myself in a role not dissimilar to that of John Minto 1981.  Difference is; I stand against Apartheid in New Zealand. 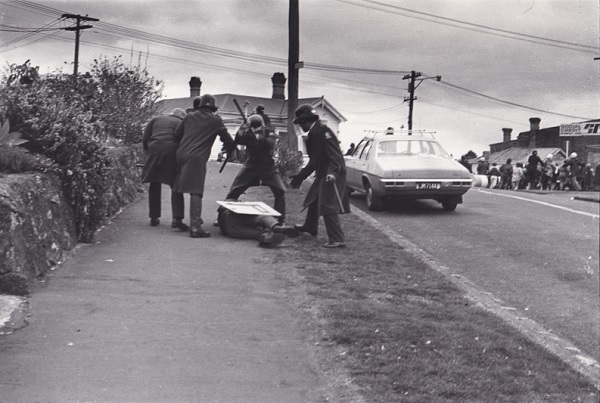 In 1981 John Minto and Rebecca Evans and Dick Cuthbert were highly visible leaders of, protests against Apartheid in South Africa.

In my assessment, The Tour produced a consistent level of extreme street violence not seen since the Maori Wars nor seen since.

In my assessment the country was pretty much divided down the middle – for or against The Tour.

In my assessment, the police were the meat in the sandwich.

And, in my assessment, Rob Muldoon had a political motive for permitting The Tour to proceed.  The General Election returned National to the Treasury benches – with a majority of one.

The 1981 Springbok Tour was to have a major impact on my life. At first it seemed the tour handed me a golden chalice. But, as time passed by, I found that chalice to be filled with poison.

From famous to infamous. From revered to reviled. The vicissitudes of life.

The Tour arrived at my doorstep, an unwanted parcel.  At the time I was in my last year of part time university studies to graduate with my first degree and waiting for my inspector rank (which would elevate me to only one, of 5 percent of commissioned officers at the time, with a degree).  Our first child had arrived 6 months earlier.  I had other things on my mind – aside from trapsing around the country protecting the Springbok

I was assigned as second in command of the Red Escort Group.  In that capacity I was to play a major role in the actual street tactics which we developed and invariably as commander of the front-line Squad of the Group.  But when Red Group were locked under the grandstand at Hamilton rugby park as the protestors smashed down fences and invaded the pitch, all our training and preparation had been in vain.

And so, when Commissioner Bob Walton said to the nation after the event: “If I had had the entire police force at the ground I could not have done more,” I knew he was talking a crock of crap. (1)

Prime Minister Muldoon was out of the country at the time, but a few days later when Red Squad was in New Plymouth waiting for the tour to be called off, I was summoned from the mess (dining hall) to take a call from him. He asked me to repeat what I had 24 hours earlier told Justice Minister Jim McLay (at the time I was a branch treasurer in Jim’s Birkenhead electorate.)

Six years later, sharing a whiskey with Sir Rob and Winston Peters in Parliament, where I had arrived as MP for Hobson, Sir Rob reflected on that conversation.

The Prime Minister said words to the effect of: “When you told me that Red Squad could have stopped the protester break-in at Hamilton’s Rugby Park, had you been let out of the cage the squad was confined to until too late; and that together with Blue Squad, the police could stop any future park invasions, that was critical to my decision to continue with the tour.”  (2)

When the Springbok departed New Zealand on 13 September 1981, most heaved a sigh of relief and went back to work as it had been before the Bok had arrived 3 months earlier. But that was not to be the case for all.

Whereas Red Group had been heroes to many during the Tour, as the mood of the nation changed and the pendulum of support for the police swung from respect to contempt, support waned.  The squad was disbanded and progressively – to this day – many members of that elite unit, avoid association with it.

For me personally?  Catastrophe loomed.

Because I took a case to the Ombudsman to protect the rights of Squad members from the legally questionable interview procedure into allegations of brutality, conducted by internal police investigators.

And because I disregarded a questionable instruction of the Commissioner, not to publish an account of the Tour: THE RED SQUAD STORY, (subsequently a best seller in New Zealand and South Africa).

And, combined with an early sign of defiance in my character when  I had refused a “suggestion” by Walton to change the evidence I was about to give at the 1979 Royal Commission of Enquiry into the Arthur Thomas case (I had been the scene detective at the Crewe homicide scene who did not find a cartridge case which was found 3 months later but which the Commission determined had been “planted” as fabricated evidence), my promotion to commission rank was deferred until Commissioner Walton retired.  (3)

To this day, I remain proud of what Red Group achieved.

But, as time passed, the group became the face of police brutality. The clown’s affair where protesters dressed as clowns were beaten by a member of my squad and a photograph of a protestor in Onslow Road, prostrate under a shield for protection from a member of my squad smashing the shield with a PR 24; to this day contribute to latent lingering hostility. (3)

As I gained profile from authoring the bestselling book The Red Squad Story, and later as an MP, it was I who copped the vilification and odium heaped upon Red Squad. The poison in the chalice of gold.

Today, in my assessment, the Government is heralding the introduction of Apartheid to New Zealand.

In 1981 I was one who literally fought to protect the rights of Kiwis who wanted to exercise their lawful right to attend rugby games and not have their travel disrupted by protestors who disregarded the rights of fellow Kiwis in their quest to fight Apartheid in another country.

Today, I find myself in a role not dissimilar to that of John Minto 1981.  Difference is; I stand against Apartheid in New Zealand.    Consider the follow justification for my claim:

Giving Maori access to funding for their legal costs to claim the Seabed & Foreshore, from mean high tide out to 12 nautical miles.  Opponents to Maori claims must fund their own legal costs.

In my assessment it would be more beneficial for students if was to become compulsory to learn a foreign language of their choice such; German, Spanish, French, Chinese, Japanese, Arabic, Russian, Indian, Italian, Portuguese, Cambodian.

In my assessment, what Labour are doing, is tantamount to imposing a form of Apartheid by elevating Maori above The Rest of New Zealand.   That will generate animosity and hostility.  At what stage does this become a recipe for civil war.

How dare I say these things?

Must I be a racist because I don’t agree with elevating Maori culture above The Rest?

Problem is; I have Maori pedigree from paternal and maternal great great grandparents. For the evidence of this, read: A Step Too Far (5):

I don’t agree with elevating Maori culture above The Rest?  It divides our country.

Question?  By holding this opinion and being contrary to government policy, am I to be denied my democratic rights and be charged with hate speech?

If I must go to jail for saying this; then so it be.

Ross Meurant resigned from the police at inspector rank in 1987 to enter parliament as a National MP. Today he is Honorary Consul for Morocco and trustee and CEO of commercial assets owned by absentee Russian investors.