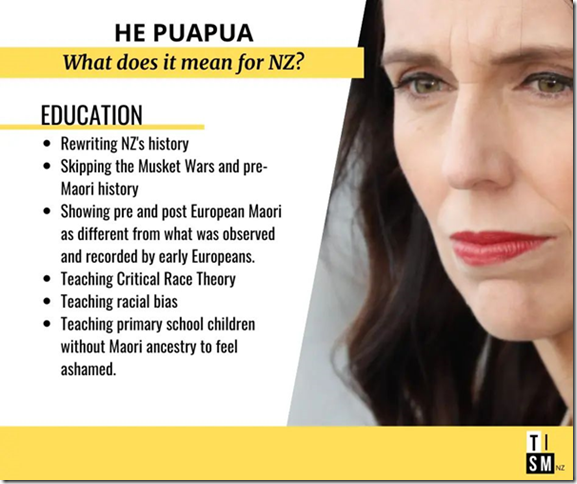 Almost $700,000 has been spent on making half of the Ministry of Education bureaucracy feel guilty about the colour of their skin, according to emails released under the Official Information Act.

“It’s part of this Government’s pervasive fetish that commodifying people into identities is clever and new when we know that treating people based on their race and the colour of their skin is just old-fashioned racism and discrimination,” ACT Party leader David Seymour said.

“What they are really saying is that you are responsible for things that happened before you were born, and that what people of your skin colour did in a different century is somehow your responsibility,” he said.

The course had American content removed because they wanted to cover up the fact that they had imported this Critical Race Theory from the United States and force it on the New Zealand civil service and then force it on our kids, he said.

The interview may be found at Diversity courses

Who is driving the He Puapua plan?

The exclusive biculturalists, such as those driving the He Puapua plan for two governments under tribal monitoring, are actually a rather small group of people numbering only in the hundreds, according to Auckland University Education Professor Elizabeth Rata.

“They are ethnically diverse and include iwi Maori leaders, intellectuals, lobbyists, academics, activists, lawyers, officials, media figures and politicians,” Professor Rata wrote in “Time for a new interpretation of Treaty” that was published in the Otago Daily Times on July 20, 2021.

“Tight self-referential networks, strong personal relationships and a willingness to play the long game has led to remarkable success,” she wrote.

Our petition against the separate governments plan has picked up more than 9100 signatures. If you have not done so already, click here to sign  Reject co-governance

In a judgement released on July 15, the Supreme Court dismissed applications by Poutama Kaitiaki Charitable Trust and farmers Tony and Debbie Pascoe, who own land being used for the bypass, and who sought leave to appeal a High Court decision allowing the project to go ahead.

First announced in 2016, the project planned for the main highway north of New Plymouth was approved by the Environment Court in 2019 which found that neither the Pascoes nor Poutama had Maori ancestry linking them to the land, nor was there any evidence Poutama was an iwi exercising mana whenua.

Instead, that court held that North Taranaki tribe Ngati Tama exercised "mana whenua" and "kaitiakitanga" over the land. The Pascoes and Poutama appealed this in the High Court. See Mt Messenger bypass decision

“Mana whenua” means the tribe that has historic and territorial rights over a specific area of land. “Kaitiaki” means a guardian or trustee, typically of an environmental area or resource. (Originally, “tiaki” meant “to care for”, “kai” meant “food”, and "tanga" meant the circumstances of the aforementioned.)

Last July, Ngati Tama voted to accept a deal in which 20 hectares of land needed for the Highway 3 bypass would be swapped for a 120-hectare parcel that would allow access to Treaty settlement land currently "landlocked" by other farms.

That deal includes a $7.7 million cash cultural mitigation payment and a pest management scheme. The sweeteners were in return for supporting the project.

Ngati Tama needed a minimum of 10 per cent of its 1000 members to vote on the deal and 75 per cent of those who voted needed to agree to take it. See Iwi backs deal

The Pascoes have been offered either a $176,000 deal that would allow them return to their home and what's left of their land after the road is built, or a $660,000 deal including an 11-hectare block on Mount Messenger and a contribution to a new home. See Existence of hapu questioned

A further appeal against the project’s recourse consents and design is due to be heard in the High Court in October.

Recognition of Ngati Tama's claimed association with places within their area of interest, as recorded in their 2003 Treaty settlement, which included financial redress of $14.5 million, enabled them to achieve a payment that was much greater than those offered to the private property owner.

The compensation payment to the "mana whenua" group that is at least 12 times greater than the payment offered to the private property owner look like an instance of race-based preference that successive governments deny the existence of.

Our petition which asks Parliament to amend the Marine and Coastal Area (Takutai Moana) Act 2011 to restore public ownership of the coastal area, put all claims through the High Court, and repeal customary marine title, while affirming customary rights has picked up more than 38,000 signatures. We need your support. The petition may be signed at https://www.change.org/beaches4all