Finlayson said that people can “continue to launch their boat where they always have done”, adding a swipe at Hobson’s Pledge supporters by saying that “there remained a sector that wanted people to believe otherwise”.

Ngati Pahauwera sought direct involvement with Finlayson in applying for customary marine title over the area from between the mouths of the Poututu Stream in the north (north of the Waihua River) to Ponui Stream in the south (just north of the Waikare River), including the Mohaka River mouth and extending 12 nautical miles out to sea.

Finlayson ignored evidence provided by the Council of Outdoor Recreation Associations of New Zealand that the tribe had not exercised exclusive rights to the area since 1840, as required by the Act.

Finlayson hired an independent assessor, J.M. Priestley, who wrote a report that echoed Finlayson’s views that the tribe should be granted special rights to the area in the form of customary marine title, protected customary rights, and the right to declare areas sacred with $5000 fines for any infringement.

Since 1840 there has been no impediment to the exercise of customary rights such as paddling boats, fishing, gathering seafood, and collecting stones for use in cooking.

Finlayson has created new property rights, namely customary marine title and protected customary rights, and has offered these rights to a small group of New Zealanders on the basis of race.

That is what Hobson’s Pledge members object to.

Given that the legislation defines rights available through customary marine title it is difficult to understand how the Minister can categorically state that there will be no change to current enjoyment of use by the public. Only time will tell the true impact that these rights will create.

What really are the big election issues? NewsHub says they are housing, immigration, your money, health, education, law and order, global warming, conservation, and water bottling.

While the mainstream media routinely ignores anything criticising race-based policy, our poll published last week showed that 91.1 percent of us support the idea that the Government should treat all of us equally at law irrespective of ethnicity.

From now until September 23, election day, there will be many, many polls. Be sure to let any pollster who may contact you know your thoughts on unequal, race-based policy. 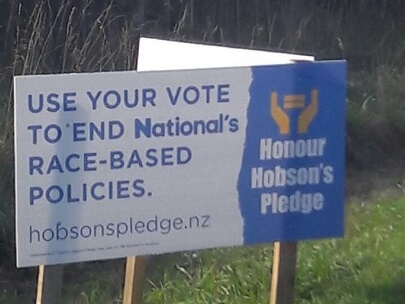 Put up Hobson’s Pledge signs in your area

Our campaign has gathered a substantial group of volunteers throughout New Zealand, some of whom put up a large number of signs in Hamilton. We can supply 1200mm x 900mm corflute signs if you can supply the fence or building to display them. If you wish to put up a sign or 10, please contact us at [email protected]