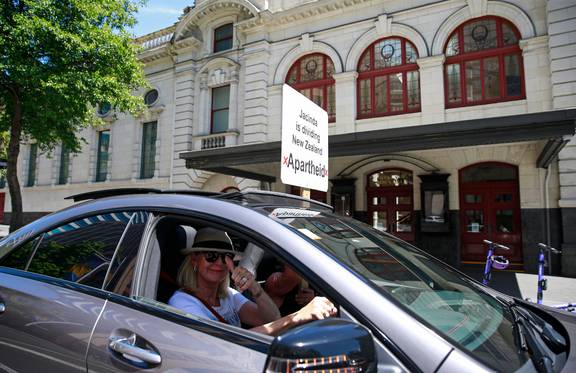 Tens of thousands of like-minded citizens in 70 towns and cities throughout New Zealand drove in solidarity against costly and counterproductive government plans for council water infrastructure, the environment, and the ute tax – among numerous other issues.

We at Hobson’s Pledge are fully aware of Nash’s strategy of smearing the messenger to deflect from the message because we have been putting up with it for years.

Even though we were largely confined to our vehicles in light of Covid-19 regulations, there was no impediment to discussion. Hobson’s Pledge supporters would have felt at home with the thousands of conversations that took place up and down the nation.

You may not know that the entire Urewera park has been closed for months as the tribal authority which co-governs the former national park demands more money to run their “guest service”. See Walk closed

A Treaty settlement seven years ago netted the tribe, Ngai Tuhoe, $169-million in financial redress, declared that the Urewera park was a legal “person”, and set up a co-governance board, Te Uru Taumatua, made up of six Tūhoe representatives, and three from the Crown.

All assets that were owned by the Crown pre-settlement – huts, campgrounds, bridges, boardwalks, the Lake Waikaremoana Holiday Park – remained in Crown ownership, but the board has day-to-day operational responsibility.

Tamati Kruger, the board chairman, said that the $2-million a year provided via the Department of Conservation to maintain Te Urewera, was “overly miserly”.

We suggest that this current demand for money shows what’s wrong with setting up race-based co-governance boards with a tribal majority.

Moreover, it poses a stark warning of what lies ahead under He Puapua, the plan for two governments of New Zealand, one by Maori for Maori, and the other, a bicultural version for everyone else.

Listen to Don Brash on radio

The 15-second Hobson’s Pledge radio advert in which Hobson’s Pledge founder Don Brash says “there might be Three Waters, but there should be only one people” and urges everyone to “sign our letter to the Prime Minister now at hobsonspledge.nz”  may be heard here: Radio advert

Have you noticed that your vaccine pass, if you have one, recognises you as a citizen of Aotearoa New Zealand under the government of Te Kawanatanga o Aotearoa.

The sole reference to the New Zealand Government appears in very small print.

It looks like under the cover of Covid-19, the Government is steadily moving forward with their radical, cultural revolution that can only end in tears.

Our petition which asks Parliament to amend the Marine and Coastal Area (Takutai Moana) Act 2011 to restore public ownership of the coastal area, put all claims through the High Court, and repeal customary marine title, while affirming customary rights, has picked up nearly 47,000 signatures. We need your support. The petition may be signed at https://www.change.org/beaches4all