One Law or Two Monarchs? By John Robinson and Roger Childs 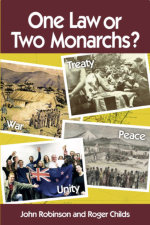 For over 500 years Polynesians had New Zealand to themselves. However, towards the end of the 1700s, Europeans started arriving to exploit the resources of the country. A technologically advanced culture began interacting with a Stone Age society, and those connections increased as more and more settlers, mainly British, arrived. This book is about those interactions in the 19th century.

It is particularly designed for Social Studies and History students coming to grips with the Treaty of Waitangi and the impact of colonisation on Maori. However, adults wanting a very readable account of this vital period of New Zealand history will find this balanced coverage interesting and informative.

The text starts by briefly looking at the history of world migration through to the arrival of Polynesians in the country, the evolution of written laws and early European interest in New Zealand's seals, whales, flax, timber and other resources. Then it moves on to cover the coming of Polynesians and the culture they had established by the early 19th century.

The decades of inter-tribal wars were crucial in the reluctant decision by Britain to take on New Zealand as a colony, and the outcome was the far-sighted Treaty of Waitangi in 1840.

Succeeding chapters look at the extension of British law across the country, which most Maori accepted, but some resisted.

Once the North Island wars had ended, peace and colonial development ultimately benefited most Maori. Different aspects and interpretations of this generally positive process (for example by Apirana Ngata), are well covered. One of the strengths of this book is that it relies heavily on the accounts of the people - Maori and non-Maori - who were living through the events of the time.