This Bill that will soon become law means that more and more Kiwis will be held up by participating iwi over resource consents.

This is because Prime Minister Bill English and Environment Minister Nick Smith decided to put iwi above Kiwi in resource consents and in everything to do with the environment.

The balance of power in Parliament may be changed on September 23 this year, through the election.

Don’t take National’s word on what these iwi clauses pose. Don’t even take ours.

Instead, read this series of Maori Party Facebook clippings.

They’re laughing at National. And they spell out the tribalist agenda with devastating clarity.

“Negotiations aren’t always about we can get. Sometimes it’s about what we can stop.”

In other words, start saving for the ransom demands. The tribalists have just won the power to hold up New Zealand one council at a time.

Smith and English have just let a select group of their hapu and iwi mates become the official guardians of all New Zealand mountains, rivers and the rest of the natural world. 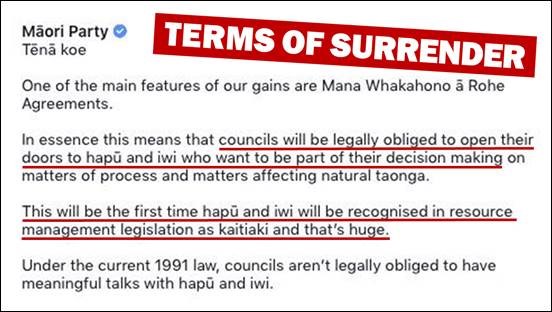 Those words again, for those who can’t see the image:

“Councils will be legally obliged to open their doors to hapu and iwi who want to be part of their decision-making.”

“This will be the first time hapu and iwi will be recognised in resource management legislation as kaitiaki and that’s huge.”

Now here’s that first quote again, fleshed out with evidence… 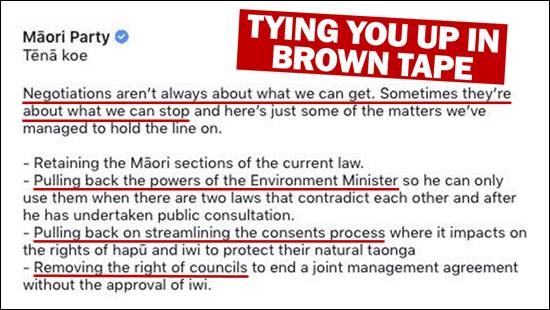 “Pulling back the powers of the Environment Minister…”

“Pulling back on streamlining the consents process…”

“Removing the right of councils…”

‘The Bill gives every local authority exercising RMA powers 18 months to reach a power sharing agreement with any iwi or hapu that asks for one.

‘If they can’t agree the agreement will be dictated by forced mediation, with “guidance” from the Minister.

[The Minister in charge of the surrender.]

‘Once reached the agreements are permanent, unless iwi/hapu agree to amendments.

‘There is nothing in the legislation to protect citizens from permanent subjection to the religious/cultural/venal demands of unelected iwi leaders with their hands on some of the most critical levers of local government.’

We’ve got to get rid of this Bill. And this Bill… 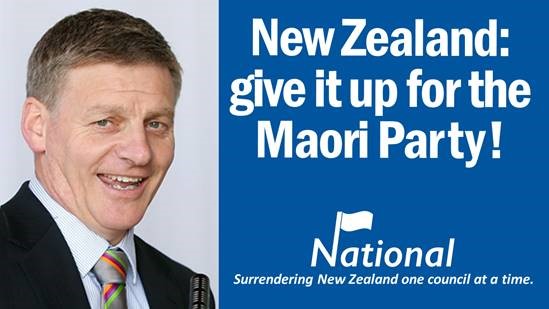 For betraying the will of the people, tell Bill English, Nick Smith and your National MP that you will never vote for them, the National Party or any other National MP ever again.

Oppose English and Smith’s decision to put iwi above Kiwi in the Resource Legislation Amendment Bill.

Join the campaign to change the balance of power in Parliament in the election on September 23 this year.

Go to www.hobsonspledge.co.nz to support and donate.

Above all, share this message to friends and associates far and wide.