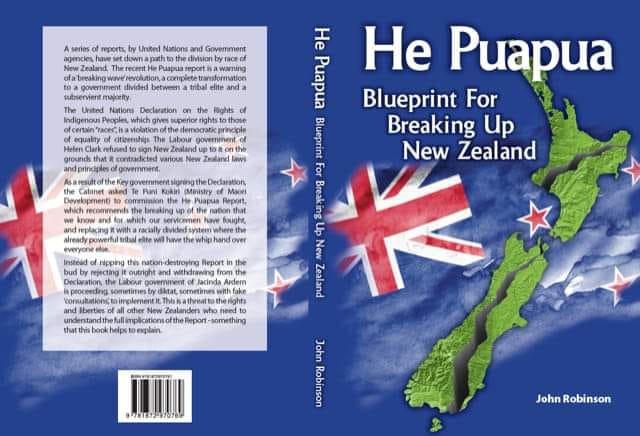 In a new book titled He Puapua – Blueprint for breaking up New Zealand, mathematician John Robinson, tears apart the He Puapua plan for two separate governments, one by Maori for Maori, and the other, a “fully bicultural” administration for everyone else.

History written by a person who majored in maths and physics, and who has a PhD from the Massachusetts Institute of Technology, brings analysis based on numbers and a focus on measurement.

The immediate focus of measurement in the He Puapua race-based reorganisation of New Zealand, for Dr Robinson, is that if we are to have a percent of the population governed by Maori, how do we determine who is a Maori and what actually is that percentage?

The current definition, which essentially says “a Maori is a Maori”, is nonsense, and the definition used up to 1972, that one had to have more than 50 percent Maori ancestry to qualify, has been discarded.

He exposes the gerrymander used in calculating the number of Maori seats (there should be five, not seven).

“The way in which the actual number who registered themselves and families as Maori in the Census, 625,600, has been doctored to produce a ‘Maori descent electoral population’ of 896,600, an increase of 43 percent,” he wrote.

This manipulation of figures is currently being used by councils setting up Maori wards to impose an inflated number of Maori roll councillors.

He thinks that this Government should be remembered as the Ardern-Mahuta Government because Minister Nanaia Mahuta of the Tainui tribe is the power behind the throne.

He Puapua – Blueprint for breaking up New Zealand, John Robinson, 178 pages, illustrated, is available from www.trosspublishing.co.nz for $35 (including postage), or from Paper Plus.

Our petition against the He Puapua plan for two separate governments under a tribal committee has picked up more than 9300 signatures. If you have not done so already, click here to sign  Reject co-governance

‘Aotearoa’ referendum a winner for Nats

National Party leader Judith Collins is “on to a winner” when, on Tuesday, she called for a referendum about the use of the word “Aotearoa” in place of our country’s proper legal name, “New Zealand”.

Online news and views paper The BFD wrote that “immediately she was attacked by both the Team of $55 million (media) and every other party in parliament”. See Collins

Newshub presenter Duncan Garner put the problem with the proposal into a nutshell. He said: ‘Imagine being overseas: “Where are you from mate?” “Aotearoa.” “Oh yeah. Where’s that?”  “New Zealand.”’ See Should we change the name?

A poll at Newshub, which is now closed, showed that 79 percent of us favour the name “New Zealand”, 15 percent like “Aotearoa New Zealand”, and only seven percent favour “Aotearoa” (if you add these numbers, there is a 1 percent discrepancy that may be due to rounding). See Question of the day

Neil Silverwood, Inger Perkins and Suzanne Hills have all quit, following a fraught meeting of the board a week earlier when Mr Silverwood stormed out, after a majority vote supporting plans for the $26 million Punakaiki visitor centre. See Shock resignations

The building at Dolomite Point will be given to Poutini Ngai Tahu on completion and the Department of Conservation will lease space in it. But Mr Silverwood, Ms Hills and Ms Perkins are concerned that the gift amounts to privatising what should be a public asset.

Aside from the alleged conflict of interest, the decision by a conservation board to give a $26 million visitor centre to a tribe to profit from is another example of race-based privilege that successive governments deny the existence of.

Two years ago, National, New Zealand First, and ACT MPs defeated an earlier version of the bill with the same name that would have granted un-elected members of Ngai Tahu the right to sit and vote on the Canterbury Regional Council.

The balance of power in Parliament has shifted now that New Zealand First is out of government.  At a meeting of the regional council on May 13, Ngai Tahu sought council support for another Canterbury Regional Council (Ngai Tahu Representation) Bill.

The proposed bill would add two voting councillors appointed by Ngai Tahu, which is a private tribal entity that has extensive interests in farming and water use.

Ngai Tahu does not want Maori constituencies for which anyone who wants to represent Maori roll voters may stand. They prefer voting Ngai Tahu appointees.

The Regional Council supported Ngai Tahu on this point in their submission on Maori wards in February to the Maori Affairs Select Committee. See Maori constituencies submission

The tribe also wants the appointees paid at the same rate as councillors but funded outside of the usual source of remuneration for councillors.

The High Court has rejected a bid by Ketepunga Kaylene Clarkson and Catherine Clarkson of Ngati Kahungunu hapu Ngati Kere for a customary marine title order for coast in central Hawke’s Bay.

The judgement, by Justice Mallon dated July 30, was for the third application under the Marine and Coastal Area (Takutai Moana) Act 2011 to proceed to a substantive hearing.

The application was for a strip of coast extending south from Porangahau past Cape Turnagain.

The Attorney General questioned claims of exclusive use, as did the Landowners’ Coalition, which also questioned whether the applicants had actually held the area according to tikanga.

The applicants, one of whom is now deceased, may negotiate the matter directly with the Minister.

Our petition which asks Parliament to amend the Marine and Coastal Area (Takutai Moana) Act 2011 to restore public ownership of the coastal area, put all claims through the High Court, and repeal customary marine title, while affirming customary rights has picked up more than 38,400 signatures. We need your support. The petition may be signed at https://www.change.org/beaches4all