How about the built-in racism?

Racism, as you know, is prejudice, discrimination, or antagonism directed against someone of a different race based on the belief that one's own race is superior.

Record levels of migration to New Zealand have placed pressure on infrastructure and society, and competition for work and accommodation can boil over in racial antagonism.

Dame Susan, who prefers to call New Zealand “Aotearoa”, appears to target whites as racist although the evidence shows just as much brown or other-coloured racial prejudice alive and kicking in New Zealand.

How about built-in racism? New Zealand has Maori electorates, iwi consultation in the Resource Legislation Amendment Act, Maori boards and committees in local government, and race-based welfare such as Whanau Ora.

All of these flow from deeply rooted paternalism, which in turn is built on the assumption that a particular race is vulnerable, exposed, needing protection.

Politicians have built this sort of racism into the political structure by way of separate seats, iwi consultation and Maori boards.

A non-racist country would have laws and policies applying equally to us all. Welfare and support would be dispensed according to need, not ethnicity.

This is not the case in New Zealand. 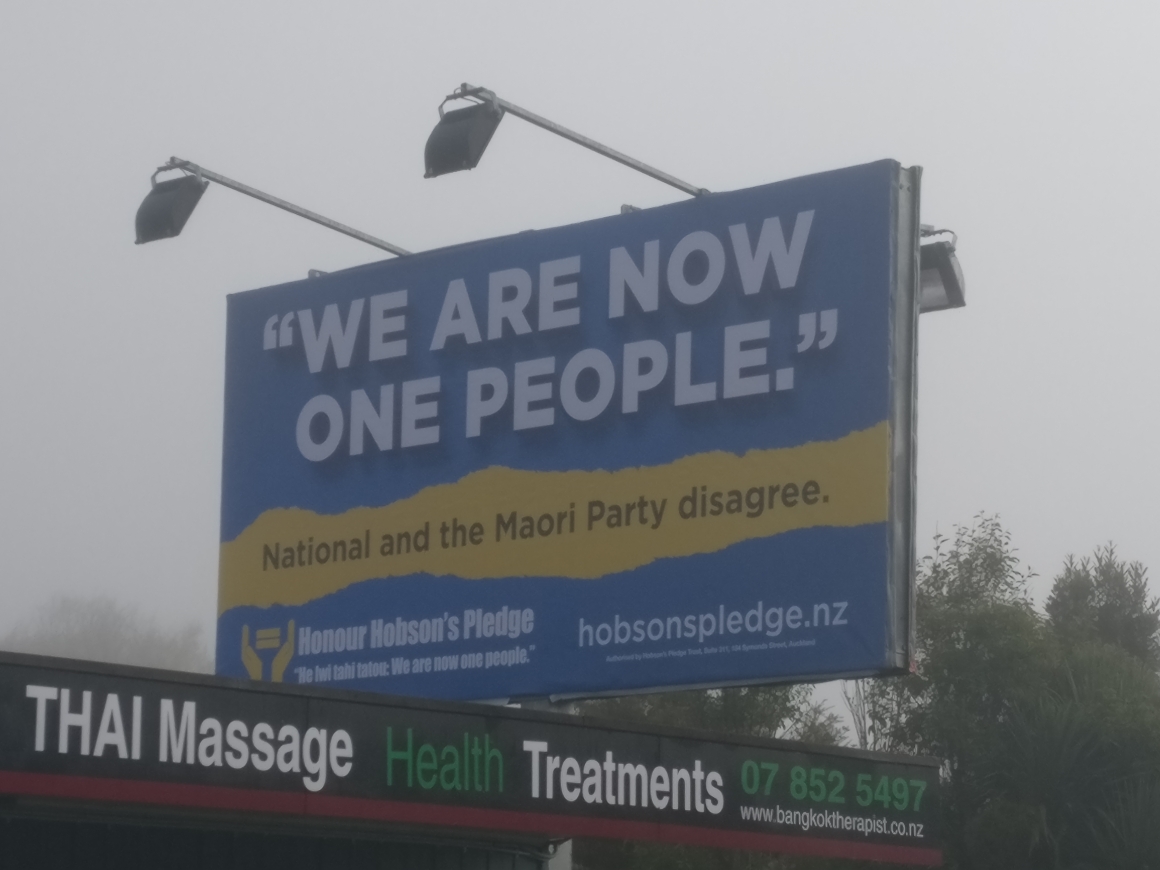 A billboard in Hamilton, pictured, plus signs on fences along the road to Mystery Creek and thousands of flyers at the Fieldays agricultural show, formed the focus of Hobson’s Pledge activity over the past week.

The corflute signs on fences, which said “use your vote to stop National’s race-based laws”, was “the most discussed topic today”, one attendee said, adding “people are livid.”

“People who described themselves as dyed-in-the-wool National Party supporters had been telling this attendee they were furious with National over the race issue, and would not be voting for them this year”.

Meanwhile, a further full-page advert appeared in the Herald on Sunday today, with close to the same contents as last week’s advert in the Sunday Star Times.

Tribes have been paddling canoes in front of commercial shipping at the Port of Tauranga over the past few days in a further squabble over Treaty settlements. See http://sunlive.co.nz/news/156323-iwi-blocking-harbour-entrance.html#sthash.njD66cYz.dpuf

Tauranga iwi, Ngai Te Rangi, Ngati Ranginui, and Ngati Pukenga, gathered on Saturday to protest against a settlement which they say will give Hauraki tribes decision-making rights over Tauranga Harbour.

Hobson’s Pledge notes that the announcement in 1985 that the government would look into grievances back to 1840 prompted criticism that (1) cash compensation would open a Pandora’s Box of grievances, and (2) that retribalizing New Zealand would resurrect conflicts that existed before 1840.

Endless grievances, tribalism, and the resurgence of old conflicts is what we have, and for this we may blame successive governments with their short-sighted goals.

$57,000 for Chatham Is settlement junket

More than $57,000 of taxpayers' money has been spent on jet-setting government officials to the Chatham Islands and back for iwi negotiations.

The Office of Treaty Settlements blamed a "lack of high-speed internet connection" in the Chathams for much of the travel, and said that neither of the negotiating iwi had access to video conferencing equipment.

A new book titled Fair Borders includes a call for Maori voices to be heard in the New Zealand immigration debate, which is dominated by business leaders and economists.

Tahu Kukutai and Arama Rata from the National Institute of Demographic Analysis at the University of Waikato also say it is time for the citizenship oath to include a reference to upholding the Treaty of Waitangi. See http://i.stuff.co.nz/business/93406703/authors-call-for-maori-interests-to-be-recognised-on-immigration

Bear in mind, various “support” groups have been marketing treaty myths to migrants for a long time. See http://breakingviewsnz.blogspot.co.nz/2015/05/mike-butler-marketing-treaty-myths-to.html