An advertisement featuring Prime Minister Bill English waving the white flag of surrender with text attacking the National Party on a single standard of citizenship appeared in the Sunday Star Times today. 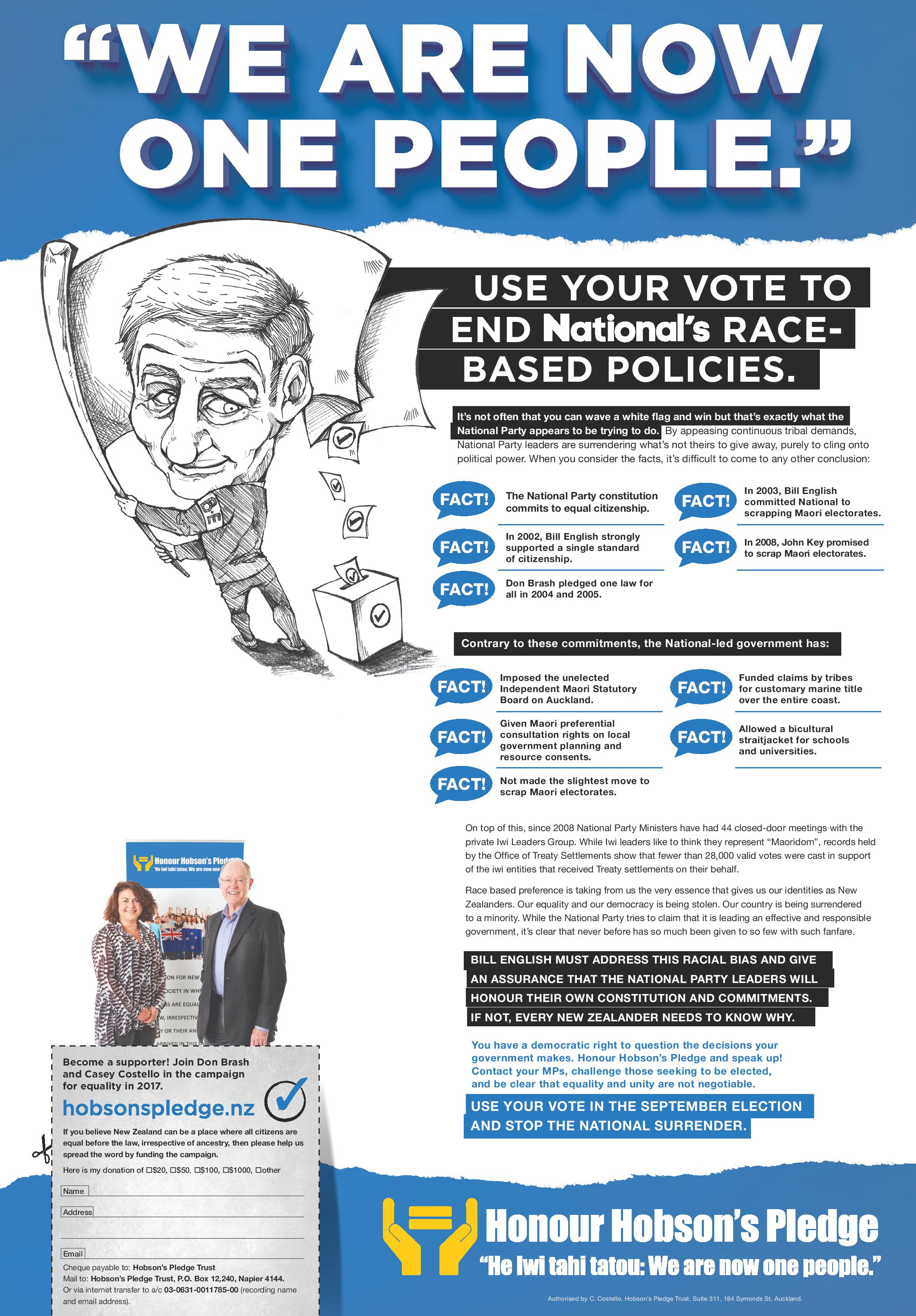 Our advert calls for an assurance from the Prime Minister that National Party leaders will honour their party’s constitution and turn away from race-based legislation, such as the Mana Whakahono a Rohe-iwi participation clauses in the Resource Legislation Amendment Act.

Treaty Negotiations Minister Chris Finlayson emphasised reconciliation in his apology at Parihaka on Friday but the media focused on atrocities and rape.

Bear in mind the most serious injury incurred on the day of the crackdown on the Taranaki settlement, November 5, 1881, resulted when a horse stepped on the foot of the future Health Minister Maui Pomare.

Those who read Friday’s media reports could be excused for thinking that government soldiers attacked the settlement, arrested the men, raped all the women and children, stole the valuables, and destroyed the buildings.

Arrests and destruction of buildings there are undeniable but, like the Chinese whispers game in which a message is distorted by being passed around, the Parihaka story has grown in the re-telling.

Media have helped grow the story. For instance, in the above-mentioned 867-word Radio New Zealand story, 145 words focus on rape. A search for evidence of rape ends with a single reference in the Waitangi Tribunal’s 1996 Taranaki Report, on page 237.

That reference cites a statement presented to the 1927 Sim Commission that said some soldiers encountered some women while seeking food on Parihaka cultivations, assaulted them, and some women bore children.

The Hobson’s Pledge position on Treaty settlements is that wherever it can be reasonably established that the Crown unlawfully confiscated property, “full and final” compensation should be paid.

However, the history upon which apologies and compensation are based should be accurate and presented honestly, otherwise both the Crown and claimants lose credibility.

For an earlier history that shows a much more complex situation than current reporting would lead you to believe, see Parihaka http://nzetc.victoria.ac.nz/tm/scholarly/tei-Rus03Hist-t1-body-d1-d4.html.

The Government stepped back from Treaty settlement negotiations with New Zealand’s biggest tribe, Ngapuhi, on Tuesday, June 6, 2017, because two groups within the tribe are still fighting over who will get the mandate to receive the money, assumed to be the biggest settlement yet.

In the current environment in which every claimant group expects a settlement, it is unclear what the Ngapuhi grievances are.

The tribe is talking up a claim that their forebears did not cede sovereignty, even though all copies of the Treaty of Waitangi that Ngapuhi chiefs signed say in Article 1 that the chiefs “cede to the Queen of England for ever the entire sovereignty of their country”.

No land was confiscated in Northland under the New Zealand Settlements Act 1863.

The Auckland Ratepayers Alliance fed-up with wasteful spending by Auckland Council is asking whether bilingual elevators were a fair expense for ratepayers. The pilot was launched at the council's Albert St premises in March with a price tag of $6200.

The council headquarters elevators broadcast floor announcements in both English and Maori.

Auckland Ratepayers Alliance spokesperson Jordan Williams says "the feedback from our 16,000 members since we've gone out with this story has been 'this is a total waste of money." See http://www.maoritelevision.com/news/regional/auckland-council-disputes-bilingual-elevators-waste-ratepayers-money