A plan for two racially separate governments in New Zealand under tribal control means that we will have to decide whether we want our future to be that of an ethno-nationalist state or a democratic-nationalist one, according to Professor Elizabeth Rata of the Faculty of Education, at Auckland University.

That plan, He Puapua, proposes the two separate governments as the only way to implement in New Zealand the United Nation’s Declaration on the Rights of Indigenous People.

In her paper titled Ethno-nationalism or democratic nationalism: Which way ahead for New Zealand? Dr Rata pointed out that the “co-governance structure would require a Tiriti body or court to regulate jurisdictional boundaries between the respective governance entities”.

“Ethno-nationalism has political categories based on racial classification – the belief that our fundamental identity (personal, social and political) is fixed in our ancestry. Here the past determines the future. Identity, too, is fixed in that past,” Dr Rata wrote.

“In contrast, democratic-nationalism has one political category – that of citizenship – justified by the shared belief in a universal human identity,” she wrote.

“We will have to choose which form of nationalism will characterise New Zealand by 2040,” she wrote.

Dr Rata also pointed out that the authors of the report displayed an astonishing confidence, when they claimed that they “consider Aotearoa has reached a maturity where it is ready to undertake the transformation to restructure governance to realise rangatiratanga Maori (self-determination)”.

Our petition against the separate governments plan has picked up more than 8700 signatures. If you have not done so already, click here to sign  Reject co-governance 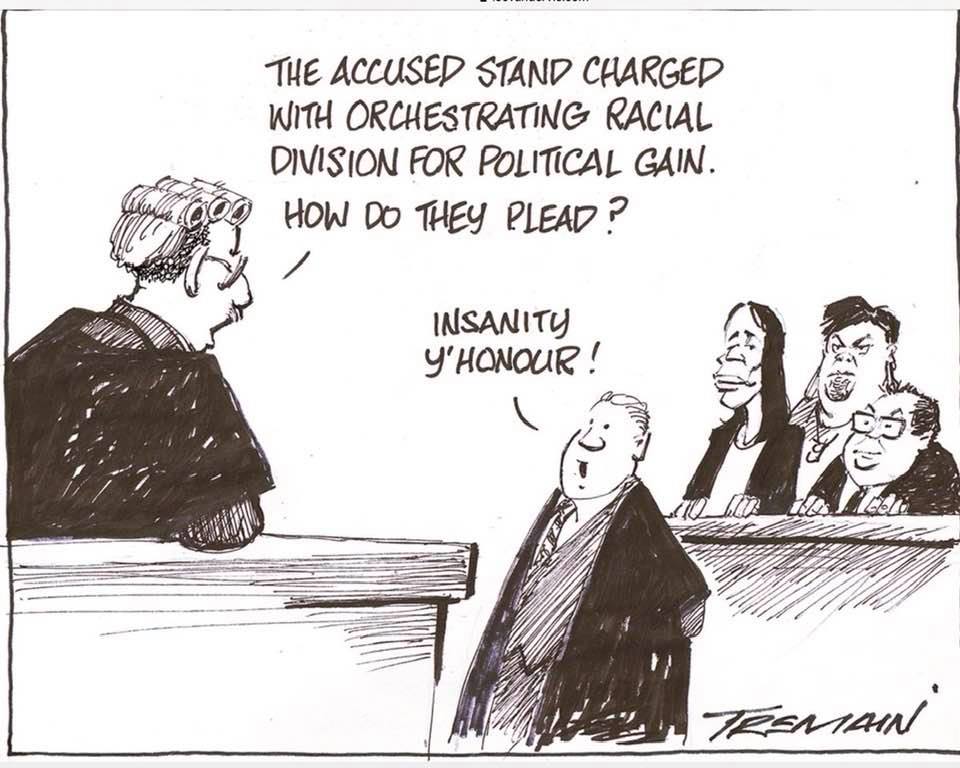 The New Zealand Geographic Board is seeking submissions on a proposal to change the name of Maxwell, after pressure from Nga Rauru, members of which fought against the Government during the 1860s conflicts.

The Wanganui District Council supports changing the name to Pakaraka.

This rural location, which is located 19km west-northwest of Wanganui and has a population of around 1600, was named in honour of George Maxwell, who came from Scotland with his family to the north Wanganui area in 1852 then moved to Manutahi, South Taranaki, in 1867.

Here’s the history: Maxwell was involved with the so-called Handley's woolshed incident, which took place in November 1868.

In November of that year, the volunteers ran into a group of armed Maori boys aged from 10 to 14 at a woolshed owned by William Handley at Nukumara.

Under the command of Bryce, who believed these boys to be Titokowaru’s Haruru fighters which included armed youths, the volunteers charged and killed two of them and injuring others.

A month later, Maxwell was killed in a skirmish outside Tauranga Ika Pa, so was never able to tell his side of the story.

When he was Native Affairs Minister, Bryce led the highly publicised crackdown on passive-resister Te Whiti at his village at Parihaka in 1881.

In 1883, historian G.W. Rudsen, in his History of New Zealand, accused Bryce and Maxwell of orchestrating the woolshed incident and alleged several women and children were killed.

Bryce sued Rudsen for libel, the book was suppressed, and damages in the form of £5,000 were paid to Bryce. It was proved that there were no women involved in the incident.

It seems that reliance on one side of a disputed incident is being used to drive this name change without trying to establish the facts or consideration to the living descendants of Maxwell.

Descendants of George Maxwell are alive today. Vilifying a person for what he may or may not have done in the 19th century is also vilifying his descendants. The past should be left in the past so that we can move forward together.

A simple submission may be made by going to https://landinformationnz.au1.qualtrics.com/jfe/form/SV_6YjKfQOAh5ykcMm

As the private appeal against the Churchman ruling which gave a section of the coast around Opotiki to Maori groups, prepares, our petition which asks Parliament to amend the Marine and Coastal Area (Takutai Moana) Act 2011 to restore public ownership of the coastal area, put all claims through the High Court, and repeal customary marine title, while affirming customary rights has picked up around 37,400 signatures. We need your support. The petition may be signed at https://www.change.org/beaches4all