Three Waters has been thrust upon us with gusto and, make no mistake, the extent to which you will have influence, control, or even interest, will be determined by your ancestry.

The Government has now announced that they are moving ahead with their Three Waters project, after making some merely cosmetic changes to the policy.

Wading through the Government's carefully selected terminology and doublespeak, Three Waters will still be an undemocratic and divisive theft from local communities. That they are continuing, in the face of strong public opposition, demonstrates this Government's commitment to differentiating interests in water by race.

Tuku Morgan, a member of the Three Waters working group, made it clear when he said about iwi:

“We have always said, that we’re not interested in owning the water assets. What we’re interested in is the proprietor rights over water, and that is a discussion to be had with the Crown, not with councils.”

Hobson's Pledge will continue fighting Three Waters every step of the way.

Local communities will be left with ownership in the technical sense only, while control is handed over to undemocratic co-governance.

To demonstrate this Government’s contempt for a unified New Zealand, they have even established a separate submission process just for Maori.

With your support, we were able to defend democracy by forcing a u-turn on the rushed Rotorua District Council (Representation Arrangements) Bill.

We can do this again.

The Three Waters project has long since lost the pretence of being about better water systems and is now clearly revealed to be a power grab that will not see better outcomes for anyone. All water users will pay more and all water users will lose the voice they currently have through local representation.

With clever spin and fear-mongering from the Government, as well as an uncritical, propaganda-spreading media, New Zealanders are being deceived. We have seen that the anti-democratic movement are not even beyond attacking our Bill of Rights to achieve their objectives.

Water is a fundamental human necessity. The idea that some New Zealanders have a greater vested interest than others in how water is controlled is an insult to all of us.

Hobson’s Pledge will be fighting against the coming legislation – this is a war on Democracy. What New Zealanders need is better outcomes from government, not more division. Undemocratic projects like Three Waters won't improve outcomes for anyone.

If you haven't already signed our open letter to the Prime Minister demanding a stop to Three Waters, click here to add your name.

As we saw with the Rotorua Bill, good old-fashioned people power can force Governments to change course. We must show the Government that they must kick out Three Waters.

For May the Fourth (Star Wars Day), Hobson's Pledge put an ad in the NZ Herald to sound the alarm on what the Government is doing with our democracy. Take a look below. 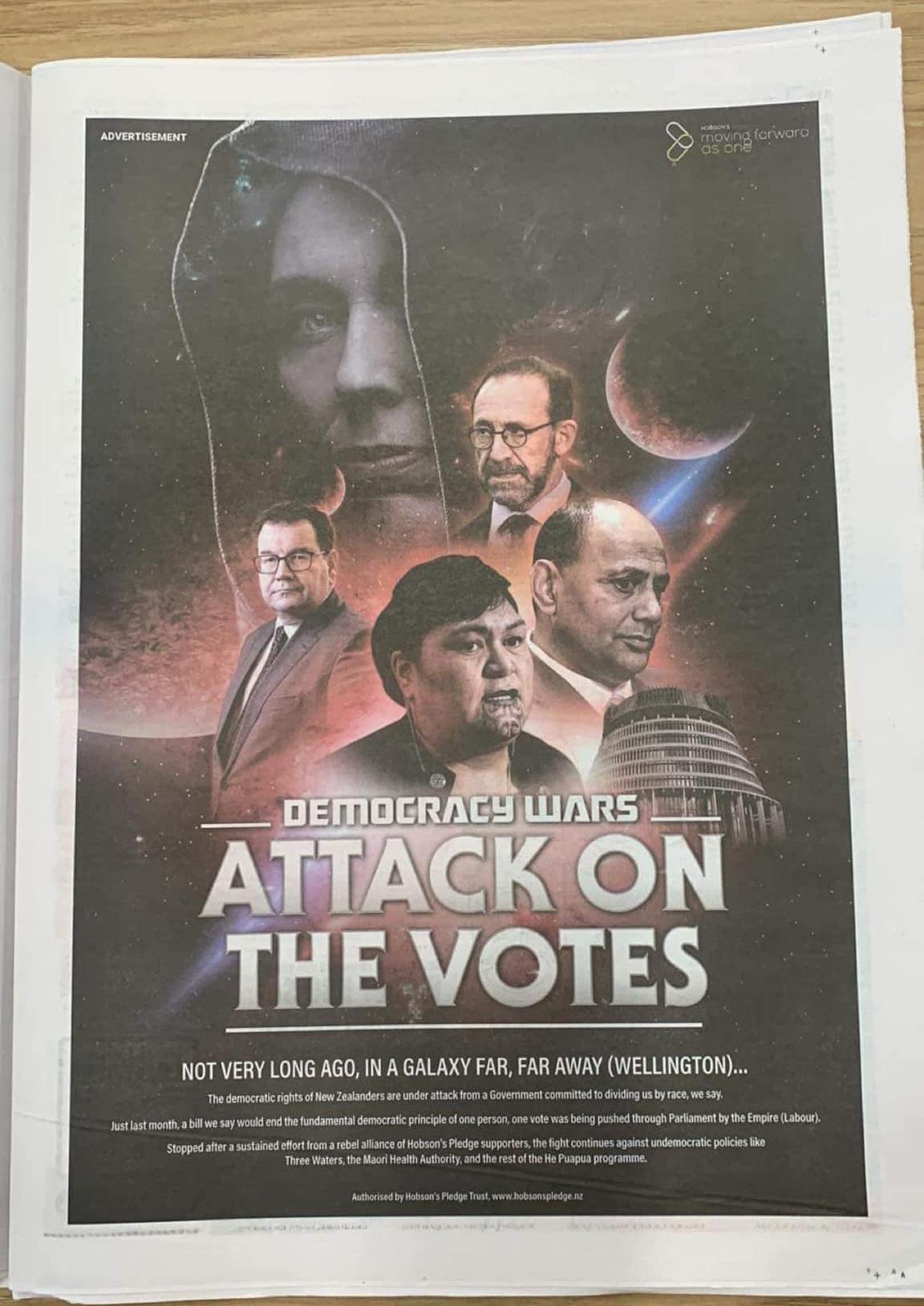 Your support is making this work possible, and we are making a difference.