The Ministry of Education is currently surveying the public on its Draft "Aotearoa New Zealand's Histories" curriculum. If you are alarmed that your children and grandchildren may be indoctrinated through a heavily biased history curriculum, you should answer the Ministry's on-line survey or send in a submission.

Feedback to the Ministry is through an online survey which closes on Monday 31st May.

The questions have been framed in a smug attitude of general compliance with the left-wing Treaty based cultural identity ideology underpinning the Education and Training Act 2020. We should be very concerned. As concluded by former teacher Fiona Mackenzie, the "draft ‘history’ curriculum is very clearly a mechanism by which separatist ideology is to be embedded into the brains of every New Zealand child − lowering our education standards, radicalising our youth and dividing communities".

Please refer below for details on the Draft content and specific concerns.

Click here to view the survey questions in advance.

We need parents and teachers to object vociferously against the document which is so hopelessly flawed that it should be scrapped. The survey can be completed in under ten minutes, your negative feedback will be registered.

The curriculum has been drafted under the provisions of Labour's Education and Training Act 2020, which requires schools to instil in each child the importance of diversity, cultural knowledge, identity, and the different official languages, and, Te Tiriti o Waitangi and te reo Māori.

A one page summary of the Draft can be downloaded here:

A flavour of some of the more objectionable material taught in te reo maori can be ascertained from a sample of text from a draft lesson plan [written in te reo Maori, translated into English using Google translate]:

PRINCIPLES (NEW ZEALAND PEOPLE)
Independent Authority
More consideration needs to be given to the impact of repression on the sovereignty of individuals and nations. Investigate a member of the tribe who argued against this; the removal of Māori power at that time and discuss their responses and actions at that time
LEARNING STRATEGY: SOCIAL INTEREST. (PKENGA)
Knowledge: to actions, behaviors and conflicts of repression in New Zealand
Clear: in the absence of equal power and effect of this to behavior and outcomes
Comprehension: to compare repressive behaviors in New Zealand to other repressed countries
THOUGHTS/QUESTIONS FOR DISCUSSION/FOR RESEARCH
What is repression/resistance? What is colonization/resistance/activism-discuss these key concepts
What is autonomy? (of people, of people)
What effect does repression have on autonomy?
What are some similarities/differences in other places/other indigenous communities/peoples? They compare these with theirs ake Compare similarities/differences
Research and gather information from the whānau/hapū/iwi of resistance, repression, and activity and people in those days. What were the reactions of those times?
What were some of the questions of the time?
Research a famous person. Research a well known person involved in these topics. Then capture the voice of the student speaking these talk and write those stories. It also ranks in those comments.
ASSESSMENT/ANALYSIS
It’s a short, visual art-to-show in stories/collections of information.
An index of information
Have an argument — its different perspectives
Organize a debate/differing perspectives.

Fiona Mackenzie has drafted the following general points which you may wish to consider in your submission:

When it comes to teaching history, primary and early secondary school children are entitled to simple, irrefutable, evidence-based information that is not designed to cause them distress. At this time of their lives, quality teaching of the basics of reading, maths and science are far more vital to the development of the child.

History’s inherent demands for research, substantiation and analysis make it more suitable for the later years of secondary school and/or university.

The best possible outcomes from studying history are to recognise and learn from humankind’s common foibles, and to understand how different environments, government and ideologies support or limit advancement. We can gain confidence in humankind’s ability, if given the right inputs, to achieve great things while overcoming challenges and adversity.

This draft curriculum fails these requisites on so many levels. It is not satisfactory for Years 1-10 as it reads like a political indoctrination designed to foster ethnic division, breed resentment and foster guilt. It is therefore inappropriate for teaching professionals to administer, requiring them to manipulate and abuse the mental wellbeing of children. If this is an example of the standard of current curricula, it helps explain the high level of anxiety being reported amongst our young.

The Three (not so) Big Ideas of this Draft 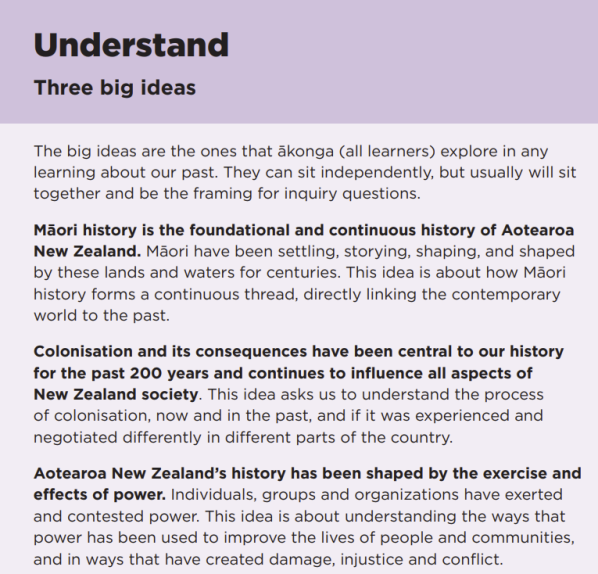 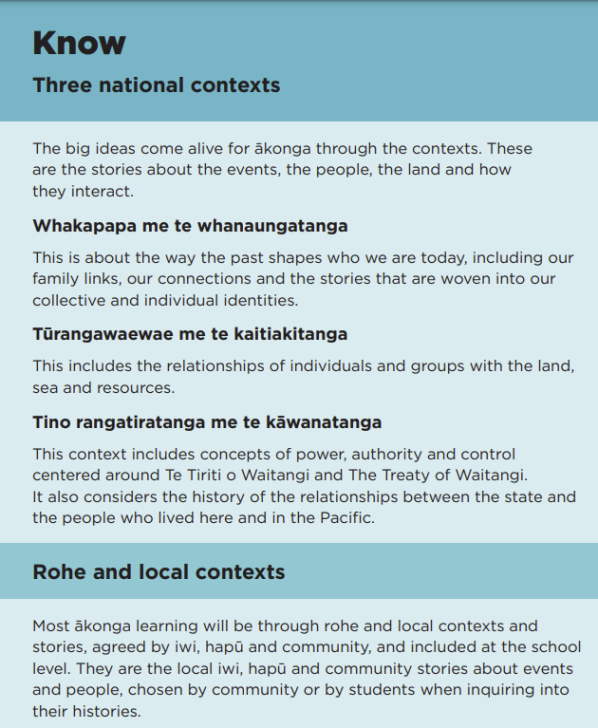 This draft ‘history’ curriculum is very clearly a mechanism by which separatist ideology is to be embedded into the brains of every New Zealand child − lowering our education standards, radicalising our youth and dividing communities. Authoritarian nations throughout history have manipulated children in this way, and I’m ashamed to see New Zealand following in the footsteps of Hitler Youth, Mao’s Cultural Revolution, Soviet Russia and North Korea in abusing the minds of children as young as five.

Prime Minister Ardern frequently refers to our “team of 5 million”, yet her Government seems determined to divide and separate us into distinct and warring factions. People who promote victimhood or foster disunity for political gain deserve no respect and certainly no place in the government of our nation.

To conclude, this draft History Curriculum is totally flawed and an embarrassment. It is not fit for purpose, and deserves no place in our schools.

One page summary of the Draft can be downloaded here:

education indoctrination identoty politics Education and Training Act Treaty of Waitangi
Do you like this page?
Tweet