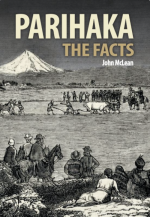 The Government’s occupation of Parihaka on 5th November, 1881, was an inevitable and necessary consequence of Te Whiti creating a quasi-republic in the bush of southern Taranaki, which refused to recognise the sovereignty of the Crown or the laws of the land, and was a haven for criminals on the run from justice, including a murderer.

That the deed was achieved peacefully was as much a tribute to the restraint from violence of Te Whiti and his fellow prophet, Tohu, as to the decision of the Government to turn up with such overwhelming force as to deter any ideas of resistance. Based on facts as they were recorded at the time, this book explains the complicated land situation in Taranaki, which led to war and confiscation. It narrates the rise of Te Whiti and Parihaka, with the monthly carnival-like meetings, the ploughing up and illegal fencing of other people’s land, tension between Te Whiti and the settlers, the Government’s failed efforts to resolve the situation, the occupation of the village by the Armed Constabulary and the Volunteers which diminished Te Whiti’s power.

It also covers the “silken detention” of Te Whiti and Tohu as they toured the South Island, their return to Parihaka, further trouble with the settlers and finally the dispute between Te Whiti and Tohu that marred their later years. This was the culmination of the decline of Te Whiti’s influence as his prophecies failed to materialise and his former influence was being replaced by that of the Young Maori Party of Apirana Ngata and others, who worked for assimilation with European ways rather than resistance to them.