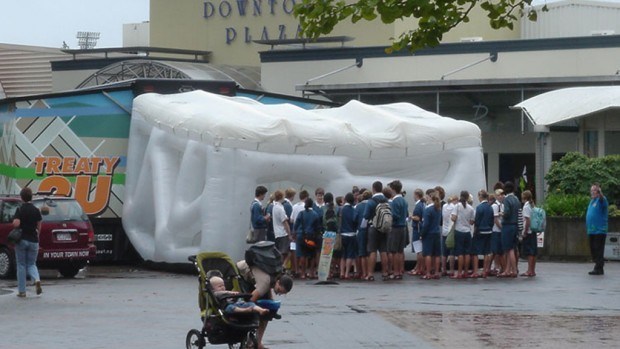 Indoctrination is the process of instilling ideas and attitudes by persistent instruction. The New Zealand government systematically fosters politically correct ideas and attitudes on the Treaty of Waitangi, our history, and the position of Maori people in society.
Once upon a time, New Zealand culture was heavily dominated by British culture and traditions.  Older New Zealanders would remember going to the movies and being required to stand for a rendition of the British national anthem ‘God Save the Queen’, singing Anglican hymns and reading the Bible at school prize-givings, and listening to a speech by some dignitary on the opening of anything official.
All that has changed.  Now, the use of Maori-culture welcoming ceremonies and choreographed war dances at official functions, school prize-givings, graduations, at the opening of government buildings, and at funerals, has created a Maori-cultural frame for day-to-day existence.
Official occasions in New Zealand in the 1950s appeared exclusively British. Today, despite the fact that we are now a multi-ethnic multi-cultural society, they appear Maori.
New Zealand government departments take politically correct thought very seriously.  In this policy area, those expressing ideas counter to the official narrative are condemned or shamed with accusations of racism.
Nurses must be trained in “cultural safety”. This home-grown concept emerged here in the late 1980s as a framework for the delivery of “more appropriate” health services for Maori people.
Culturally safe practices, according to the Nursing Council of New Zealand, include actions “which recognize and respect the cultural identities of others, and safely meet their needs, expectations and rights”. Such behaviour is contrasted with culturally unsafe practices which are “those that diminish, demean or disempower the cultural identity and well-being of an individual”. (1)
An early casualty of cultural safety in the 1990s was student Anna Penn, who said she had been “bounced out” of her nursing course for being branded culturally unsafe by the polytechnic’s Maori elder (kaumatua) after she questioned the denial of her right as a woman to speak on a marae.
Penn completed her training in Australia but has since returned to work in New Zealand.
There is a version of cultural safety for student teachers. At the application interview, prospective students must state their relationship with the Treaty of Waitangi and affirm loyalty to treaty principles.
During induction, Maori songs are learned and sung, Maori ceremonial greetings (mihis) are learned, and a trip to a Maori meeting house (marae) is customary.
Treaty principles form the moral code of the New Zealand curriculum. Woe betide any student who points out that the word “partnership” does not appear in the treaty.
The NZ Graduating Teacher standards say that “graduating teachers are required to have knowledge of tikanga and te reo Maori to work effectively within the bicultural context of Aotearoa New Zealand – no recognition of the fact that New Zealand is no longer a bicultural country, but rather one where many cultures mingle. (2)
Every teacher has his or her own story about cultural indoctrination in our schools and teacher training institutes.

In universities too, getting approval to undertake a new research project often requires the researcher to show how the research relates to the Treaty, and would benefit Maori.

Most people won’t say a word against treaty orthodoxy for fear of being called racist. Such name calling is merely a bid to shut down debate and public scrutiny.