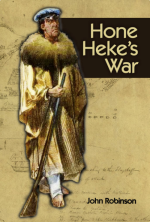 The economy of Northland suffered when the capital of the new colony was moved from Russell to Auckland. Heke capitalised on the resulting discontent and, despite the opposition of tribal elders, his call to arms brought about a war between, on the one hand, Heke, his ally, Kawiti, and their tribesmen and, on the other, a combination of Ngapuhi warriors, led by chief Tamati Waka Nene, and British forces. The ensuing battles, fought across a limited region between the Bay of Islands and Hokianga harbour, resulted in considerable loss of life and total defeat for Heke and his men. This book, by one of New Zealand’s most prolific writers of history, looks at the causes of Heke’s rebellion and describes the various battles and their aftermath.