This is a longer update than usual, with so much to cover in recent weeks.

In today's update, we look at the divisive new history curriculum, the Government running full steam ahead with the separate Maori Health Authority, shocking comments from MPs attacking democracy, and unfortunate developments with the Hauraki Gulf Forum.

The new history curriculum, announced last week, will become a tool for dividing New Zealanders, with its clear focus on two types of citizenship.

With a failing education system producing shameful outcomes in literacy, numeracy, and even attendance, this Government continues to evade accountability by distracting New Zealanders with ideology.

Although originally scheduled for introduction to schools at the beginning of 2022, there was a range of criticism, including the strong influence of ideology and the complete omission of many important aspects of our history, which caused a 12 month delay. The delay was defended by Education Minister Chris Hipkins.

“The feedback the Ministry received was wide-ranging, clear, and at times confronting. New Zealanders have a lot to say about how our nation’s histories should be examined and discussed, and that is a good thing,” Chris Hipkins said.

The new curriculum requires students to make “informed ethical judgement(s) about people’s actions”.  Making ethical judgement is not the role of history and the question must be asked as to who defines “ethical”.

Analysis of the curriculum shows the strong influence of separatist ideology.  This will do little to reduce division or encourage unity.  ACT’s education spokesperson Chris Baillie expressed valid concerns about the curriculum.

“…Labour is trying to make New Zealand an unequal society on purpose. It believes there are two types of New Zealanders. Tangata Whenua, who are here by right, and Tangata Tiriti who are lucky to be here. We should be learning the history of our multi-ethnic society.”

Funding of $22 million has been announced for the Maori Health Authority, which is being established under the Pae Ora (Healthy Futures) Bill, even though the Bill is still with the Select Committee.

Despite not yet being law, the chairs of both Health New Zealand and the Maori Health Authority have been appointed.

Supporting the announcement of the funding, the chair of Health New Zealand, Rob Campbell, criticised our current health system as being "dominated by monocultural thinking and approach".

Rather than encouraging a colour-blind health system, he appears comfortable with the provision of health services differentiated by race.

Health Minister, Andrew Little, confirms this in his statement that “theproposal wasn't for two different systems - but for one system with two partners who will have to agree.”

The question needing an answer is: Where do those in need of healthcare turn when the two partners do not agree?

The health sector does need reform, but this reform should not, under any circumstances, start with division by race and add layers of bureaucracy that effectively delivers a power of veto by one group over the entire health system.

Steven Joyce’s endorsement of the need for health reform accurately captures the problems with when he observes: “Many highly experienced observers believe they will achieve next to nothing. That’s because the reforms involve the same people giving themselves new jobs in huge new entities, probably at higher pay, with nothing else changing.”

Contrary to oft-repeated claims, there is simply no evidence that the present system fails Maori, as Dr Lawrie Knight has convincingly shown in his testimony before the Select Committee.

Maori Development Minister Willie Jackson tried to reassure New Zealanders that they have nothing to fear from 50/50 co-governance. But in reality, co-governance is totally inconsistent with any concept of democracy and Labour knows it

This was clearly evident in comments made during submissions on the Canterbury Regional Council (Ngai Tahu Representation) Bill.

Tamati Coffey, a Labour List MP who failed to win the Maori electorate seat for Waiariki at the last election, nonetheless still believes he is entitled to speak for Maori. In his capacity as chair of the Select Committee dealing with the Bill, he stated: "The Westminster system is over for NZ -   it  prolongs the tyranny of the majority". His comment was further endorsed by the co-leader of the Maori Party, Rawiri Waititi, who stated “Maori will never be equal in a democracy."

As the competition for the Maori vote heats up, Willie Jackson seems keen to demonstrate Labour is the best option, explaining they “are not obsessive like the Maori Party.”

The Maori Party leaders describe themselves as being the only “Tiriti-centric” political party and have stated categorically that they will not go into coalition with any political party, unless that party shares their interpretation of the Treaty.

Hobson’s Pledge launched a campaign to tell National that New Zealanders want their democracy protected and do not want any future National-led Government to abandon democracy by forming a coalition with such an anti-democratic party. 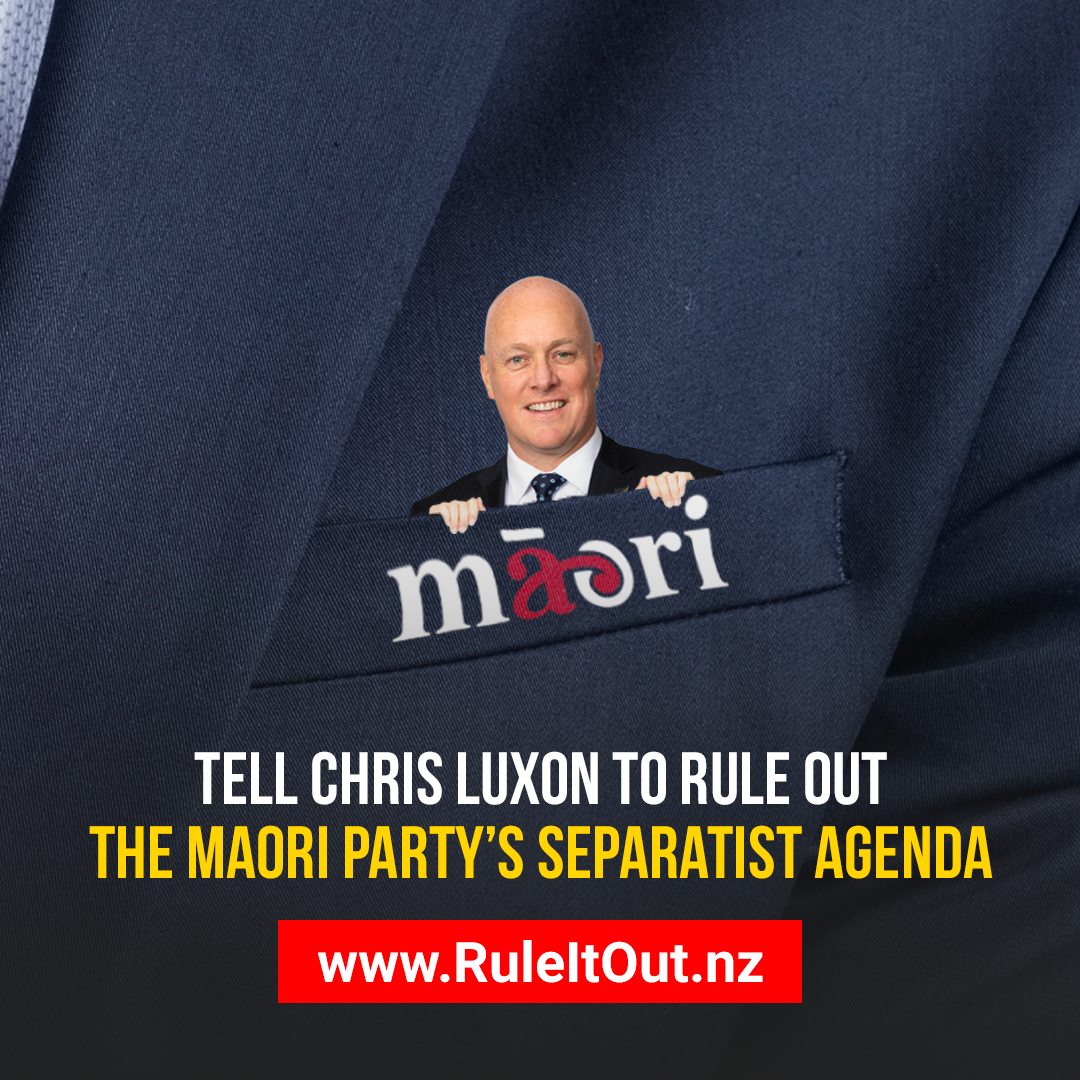 If you have not already done so, please send a message or share this link with your friends: https://www.ruleitout.nz/

Tragically, our democracy is being criticised by many of our elected representatives – Willie Jackson, Tamati Coffey, Debbie Ngawera-Packer and Rawiri Waititi to name just four – despite their being elected by the very system they condemn. The co-governance solution is really a path to tribal rule, destined to benefit the tribal elite, but unlikely to be of the slightest benefit to most Maori.

The failure of co-governance is already evident in situations like the Ureweras where, despite taxpayer funding and agreements with the Crown, the park has been left in disrepair.

The obligation on the Crown to represent all New Zealanders equally before the law is increasingly ignored. Private citizens are forced to defend the interests of the public for the benefit of future generations. Evidence of this can be seen at:

And it has taken legal action by private citizens to defend the exotic trees which the co-governed Tupuna Maunga Authority had marked for execution in Auckland.  That legal action has provided a stay of execution for 345 exotic trees on the public reserve of Mt Albert. The Court of Appeal decision of 3 March 2022, determined there had been a lack of consultation.

Unfortunately three of Auckland’s mountains had already lost their beautiful trees before private citizens stepped in to protest the action.

Despite their defeat in the Court, the Authority has already inferred they are considering next steps to allow them to proceed with their clear-felling of exotic trees.

This agenda is driven by a motivation to “de-colonise” the volcanic cones by replacing all exotic trees with native trees. But rather than a managed process of planting replacement trees in consultation with the community, the Authority simply decided that the trees represented “colonisation” and needed to be removed immediately.

The Hauraki Gulf Forum highlighted the dangers of unelected representation and lack of accountability to constituents when they voted at the end of February to change their forum’s composition to a 50-50 co-governance body with mana whenua.

The discussion on 28 February showed that some members were uncomfortable with any public accountability and annoyed at having their names printed in newspapers identifying them as forum members.

Debate even included a challenge to the use of the phrase “black and white” as being racist, despite the comment only referring to a forum member not having seen information written in “black and white”. The sentiment of the group was evident in the comments by the co-chair Auckland Councillor Pippa Coom – comments which demonstrate that she is quite unfit to represent the ratepayers of the Waitemata ward and should be thrown out at the local body elections later in the year. 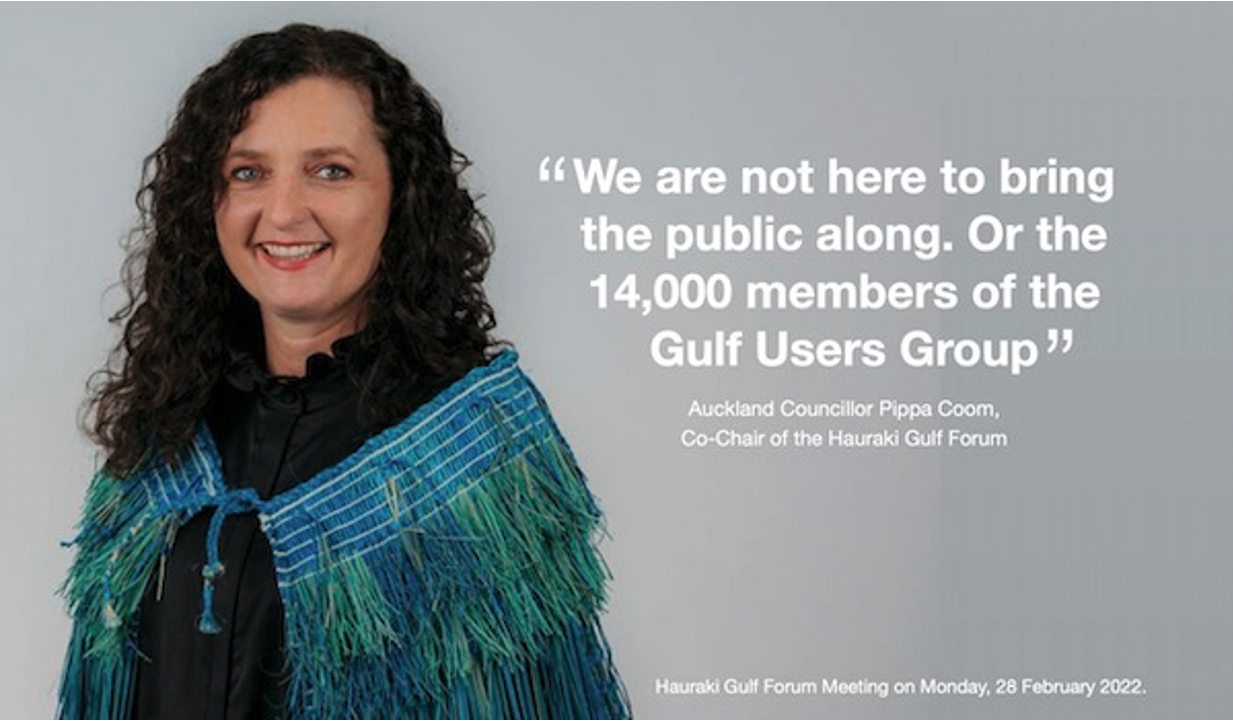 Click here for more information on the vote from Democracy Action.

Through the generosity of our supporters, in recent weeks Hobson’s Pledge has been able to push forward on a number of fronts. There is much to be done but with your support we are gaining momentum.

Please share this message with your friends and family – Hobson’s Pledge wants a unified New Zealand that absolutely will not tolerate racism or the replacement of our democracy by tribal rule.

And we are in one hell of a fight!