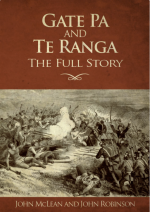 Gate Pa and Te Ranga; the Full Story describes the historical background for the decision of Ngaiterangi warriors to join the fighting against the British, including their attacks on south Auckland settlers and troops. Ngaiterangi fought as part of a pre-Treaty alliance, formed during the bloody inter-tribal wars of the 1820s and 1830s.

The reasons why almost 2,000 British troops were sent to Tauranga in 1864 are more straightforward. Tauranga was not only an important staging post for tribesmen from the East Coast and Bay of Plenty on their way to fight alongside the Kingite rebels in the Waikato, but was also supplying the Kingites with food and gunpowder. It was to stop all this and to impose law and order in what was a rather lawless place that the British carried out a military campaign, in co-operation with the loyal Arawa tribe, in and around Tauranga in the first half of 1864. The book traces the fighting from Maketu through Gate Pa to Te Ranga and the final unconditional surrender of Ngaiterangi to the Crown in July, 1864, when they laid down their arms at the feet of the Governor, Sir George Grey. Here they undertook to keep the peace in return for being well-treated by the Crown - promises that both parties kept. This peace has endured and is the real victory of Gate Pa and indeed of the whole campaign.