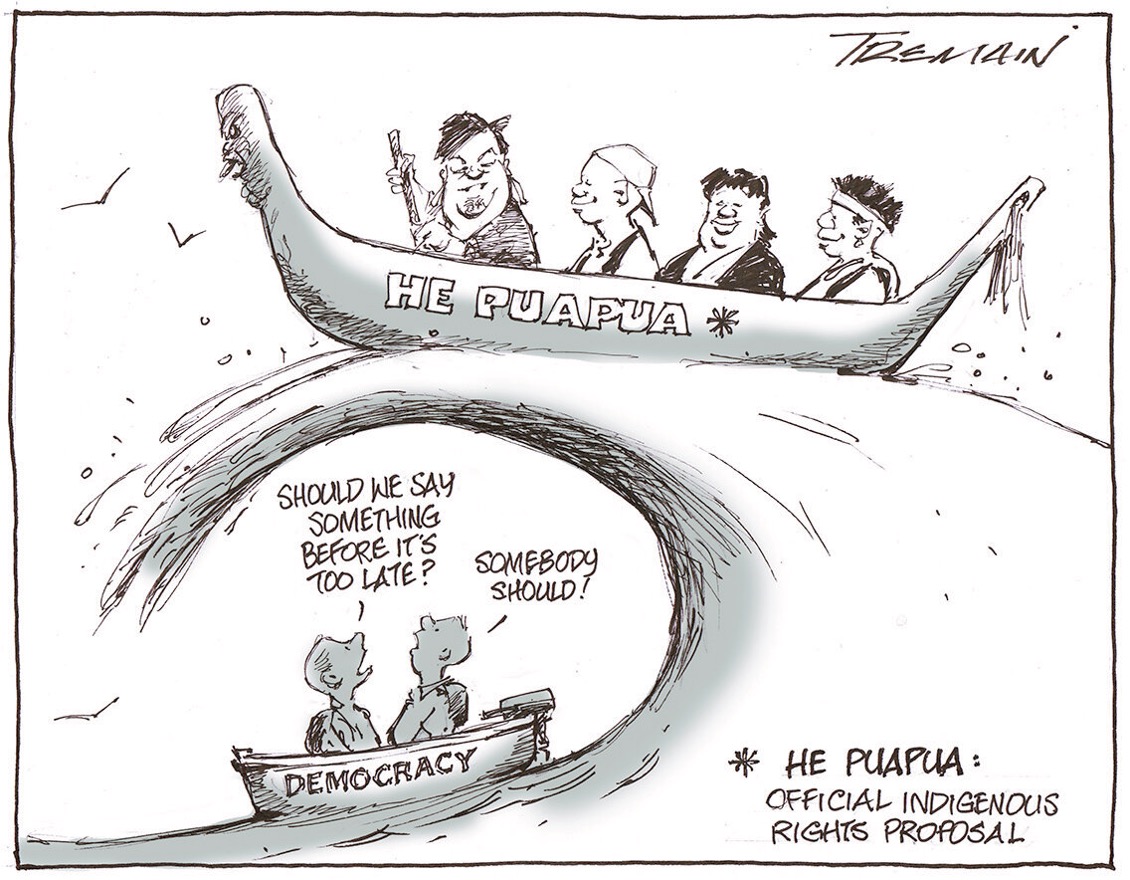 Independent polling by Curia Market Research, commissioned by Hobson’s Pledge, shows that 72 percent of voters say our country is more divided today than 12 months ago.

This is a damning indictment on this Government’s separatist agenda.

But despite this assurance it is clear that the reality is very different.

“The divisiveness perceived by the public is striking and should give the Government pause concerning the breakneck pace with which it is upending the foundations of democracy in New Zealand,” said Don Brash.

A copy of the polling report can be found at:  https://www.hobsonspledge.nz/polling_report

Since the report’s reluctant release after the election in late 2020 the attacks on democracy and equality before the law have continued unabated, and indeed have accelerated.

But, as explained by Jacinta Ruru, one of the authors of the He Puapua report, there is more to come.

In this article Ruru quotes directly from the report and concludes “But if Te Tiriti is to constrain the supremacy of parliament to make law, in order to better protect the rights of our country’s first inhabitants, new structures are required.”

Dr Claire Charters, another of the He Puapua authors, confirms this when she describes New Zealand as having a lopsided understanding of democracy explaining it as a tyranny of the majority.

It is clear the initiatives that seek to differentiate the treatment of New Zealanders based upon when our ancestors arrived in this country are still being implemented, with demands for decolonisation at the fore.

Karl du Fresne ponders the reality of the end game in this move to decolonisation in his article published on 5 February 2022.

“One last thought. It’s probably too late to suggest it now, but I’d be happy to speak to the wananga about my own imagining of decolonisation. I would invite the participants to visualise a country where there’s no rule of law, no democratic government or accountability on the part of leaders, no wheel or internal combustion engine, no printed word, no science or literature, no Western music, clothing, art or entertainment, no cities, no schools or universities, no social welfare or government subsidies and no economic development. I mean, if we’re serious about decolonisation, let’s go the whole hog.”

There has been very little political opposition to this push for separate political identities and demands for “self-determination”.

In Christopher Luxon’s Waitangi Day address, he did little to provide an assurance that National would defend the rights of all New Zealanders to be treated equally before the law.

David Seymour’s State of the Nation address, by contrast, did provide an assurance of the value of all New Zealanders.  He stated:

“Democracy means one person, one vote. It’s the basis of New Zealand’s one globally significant political achievement, realising the idea that every adult New Zealander should have the vote.

“The opposite of that principle is being rolled out in healthcare, with two systems. It is being rolled out in infrastructure, with co-governance of Three Waters. It is being put into resource management law. The three bills replacing the Resource Management Act will be filled with co-governance provisions. The history curriculum is being designed to tell the next generation that everything in New Zealand is about colonisation and most of the students are guilty before they open their textbook.”

Government should be even-handed

Shortly before mailing this newsletter, we saw the following statement from Groundswell NZ:

Groundswell NZ's main focus continues to be on the unworkable regulations impacting the rural sector. Like increasing numbers of New Zealanders, farmers have felt badly maligned by this current government and its policies. Like the protestors in Wellington we also have been ignored by the Government and called denigrating names. We can empathize with their frustration.

Whether you agree or not with the people protesting on parliament grounds is not the debate anymore. What this government, that proclaimed it would govern for all New Zealanders, has done is turn its back on a good number of its people.

How hard can it be to at least front up and talk to the people assembled on parliament grounds?

The final straw for me, and what prompted me to go public, is the way government is treating these people - turning the sprinklers on them knowing there was a storm coming, and playing loud music at night so as to not let them sleep and make them feel miserable. No farmer would treat animals like that!

Although this protest has a different focus to Groundswell NZ, we support their right to be heard and cannot understand or agree with the Government's actions. What is becoming of our once united and proud country?

Bryce McKenzie is a west Otago farmer who, along with Laurie Paterson founded Groundswell New Zealand

The justification for the expansion of separatism is the claims that Maori are being denied opportunity or thwarted by a system that conspires against collective success.

We know logically that the success of a great many Maori in politics, academia, arts, business, medicine and sport proves this to be untrue. The perpetuation of a victimhood narrative is promoted to justify the agenda.

The property development success of Ngati Whatua Orakei, reported in the Herald here, is one such example that evaporates the myth that Maori are a special needs group. But rather than create an aspirational framework, New Zealanders continue to be conned in order to justify Government policy.

Fighting for the Hauraki Gulf

Making a stand to protect democracy and ensure the enjoyment of the Hauraki Gulf and Auckland’s Regional Parks, the Gulf Users Group has been established.

You can find out more at https://www.gulfusers.org.nz/

We encourage you to support this important work.

Oral submissions were received for this bill that will establish a separate Maori Health Authority that will effectively hold a power of veto over the whole health system. It seems evident that this Government will take advantage of their majority to push forward a separatist health system. The select committee is due to report back by 27 April 2022.

Despite the Maori Affairs Committee blocking submissions by e-mail, 1700 submissions were lodged, as reported here. This Bill could set a significant precedent for unelected iwi representation to be considered a new normal.

Hobson’s Pledge is still promoting campaigns that seek to protect our identity as a nation and promote the equal treatment of New Zealanders before the law.

These campaigns can be found at https://www.hobsonspledge.nz/campaigns_hobsons.

Your support will help us send a clear message to both Government and Opposition parties that New Zealanders value their identity, their unity and their democracy. If you have not already signed please click on the links and share with friends.