Co-governance has been placed under a spotlight thanks to the referendum call from ACT. Support the Referendum

Regardless of your voting intentions or political affiliation, support for this petition is essential if New Zealanders are to have a say. ACT’s Karen Chhour spoke passionately in the House confirming the party’s position. 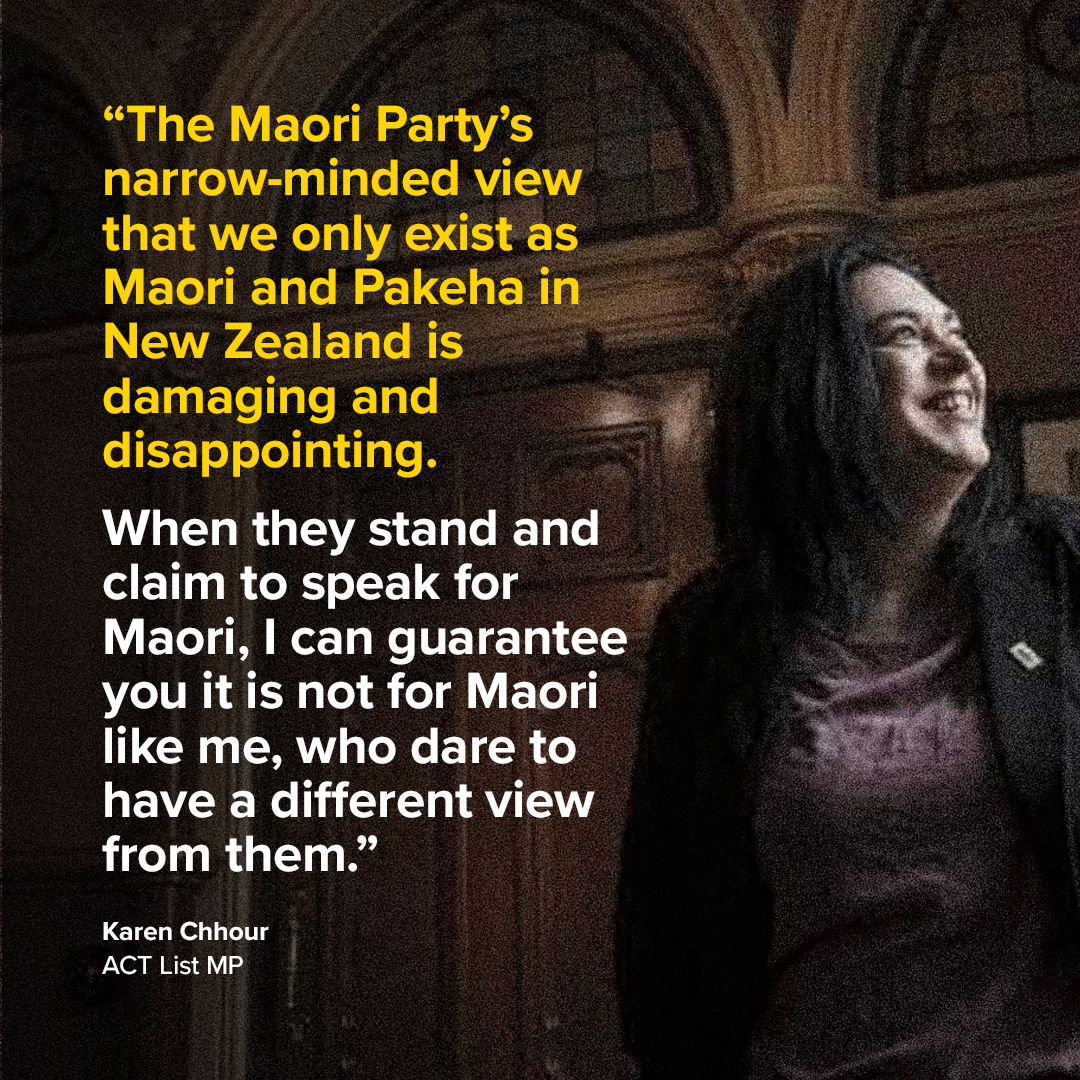 In his speech at the Milford Rotary Club, David Seymour articulated the key issues.

His comments included: “But here’s the thing. Not all Māori are struggling and not all those struggling are Māori. The best way to address unequal outcomes is to improve ALL our health and education policies – not to single out one group for special treatment because of their ethnicity.”

Concluding with a commitment that ACT will campaign for a referendum on co-governance has catapulted the issue into the political arena. Full speech here

Co-governance is also being highlighted by Hobson’s Pledge supporters. After the Maori Party announced that they would only be willing to go into a post-election coalition with a party committed to co-governance, the National Party were sent a clear message that they must rule out coalitions that would further separatism. Nearly 10,000 people used our on-line tool at www.ruleitout.nz to send e-mails to MPs, calling on National to rule out a Maori Party coalition.

The submissions to the Canterbury Regional Council (Ngāi Tahu Representation) Bill also received some media exposure, with Hobson’s Pledge directly responsible for three quarters of the submissions against that Bill. Full article here: Democracy or division: The wrangle over Ngāi Tahu and ECan | Stuff.co.nz

Labour continues its commitment to realise the UN Declaration of the Rights of Indigenous People agenda with the announcement that Maori Development Minister Willie Jackson will introduce a Cabinet paper reporting the feedback he has received from Maori on this agenda. Full article here

Prime Minister Ardern stated that it was the Government’s duty to progress the commitment made when New Zealand signed the Declaration. She again provided assurances that the He Puapua report is not Government policy, despite the 3 Waters and Health Reform initiatives being directly linked to the recommendations in that report.

This commitment to an agenda of separatism seems to be falling short of the expectations of the Maori voter base. The Hui poll, conducted by Horizon Research, not only reflected falling Maori support for the Government but also demonstrated that, as with all voters, the most important issue for Maori voters is the cost of living. See poll here

Despite the growing disconnect from its voter base, Labour is committed to co-governance despite an inability to define its meaning. Any broader discussion is thwarted by media classifying any discussion of co-governance as “race-baiting”.

Christopher Luxon has provided an assurance that the Maori Health Authority would be disestablished under a National Government, but would not support ACT’s proposed referendum on what the Treaty really means.

The resulting media interest did put some pressure on the Prime Minister to explain co-governance. Her answer fell well short of clarification: “We’re very clear on where it’s [co-governance] being used. I think unfortunately some political parties are trying to turn it into something it is not.” View PM interview here from 2:40min

“…the main purpose of the Government of Queen Victoria was for all New Zealand including the European and the Maori inhabitants, all men and the land to come under the authority of a specific government.”

This remains a truth today, despite the posturing of those who see political capital in division.

The push for separatism is leaving no stone unturned. Well summarised by Graham Adams in a recent article, it is clear that public scrutiny is the only way to ensure accountability. Adams rightly points out that almost nobody would even know this agenda exists, despite the off-hand assurance from the Prime Minister that the Government is very clear on what co-governance means. She identified only 3 Waters and the Maori Health Authority as relevant subject matters.

A quick review of the Green Paper referred to demonstrates how far this agenda is being taken in that, “We want them to lift out the resources and let us govern ourselves”.

The extent to which academics are being challenged and, in many instances, silenced is well recorded but shows no sign of being stopped, or even slowed.

With your support, Hobson’s Pledge is helping to expose the Government’s dangerously divisive co-governance agenda. We are very grateful for that support.

Please share this message to your friends and family. Hobson’s Pledge wants a New Zealand which reflects Governor Hobson’s vision, that “we are now one people”. We are totally opposed to racism in any form.