This update is a little longer than usual, to cover all the latest developments in the co-governance agenda.

But first, just yesterday Hobson's Pledge received a copy of the He Mata Whariki, He Matawhanui report on proposals for reform to local government in New Zealand.

We are working through the details, but it is clear that another nail is being set for hammering in to the coffin of New Zealand's democratic heritage. 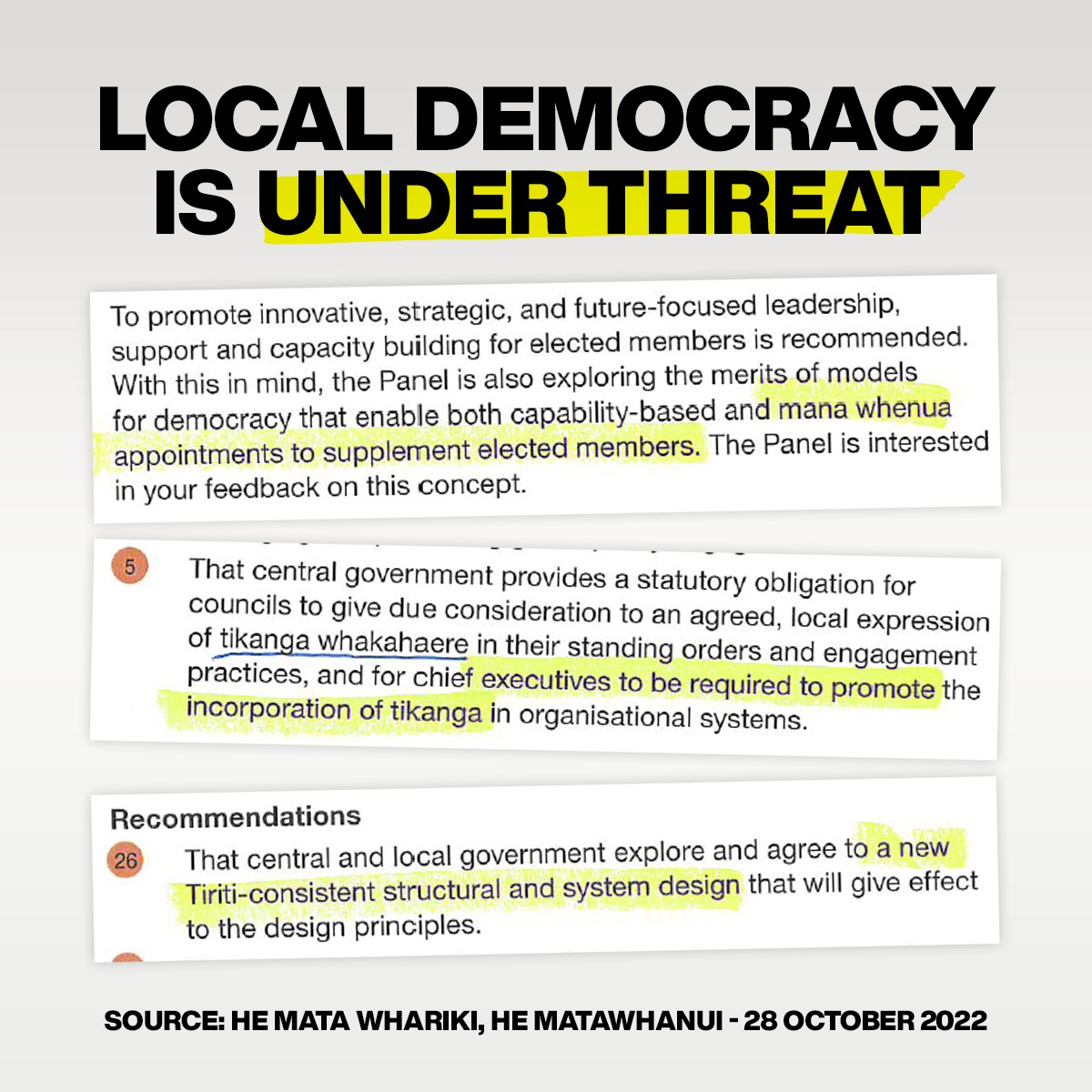 More than ever, it is clear we must defend unity and equal suffrage.

Astoundingly, there are many New Zealanders who believe that co-governance is merely due recognition of the Treaty of Waitangi. In reality though, it is a failed social experiment that has been unable to deliver a tangible benefit to anyone, including Maori.

The inability to reach final decisions due to co-governance is crippling progress, as endless consultation and consensus decision-making (read giving one side a veto) has become the new norm.

This is evident in nearly every public service that is tasked with improving outcomes for New Zealanders.

In a fitting irony, this inability to deliver outcomes is even evident in the development of the next plan to justify “co-governance” even more extensively than is currently done through The Treaty.

Our Minister of Maori Development, Willie Jackson, committed to delivering a plan for New Zealand to implement the United Nations Declaration of Rights for Indigenous People (UNDRIP). The plan was for delivery by July, followed by public consultation and then presenting to Cabinet by December. 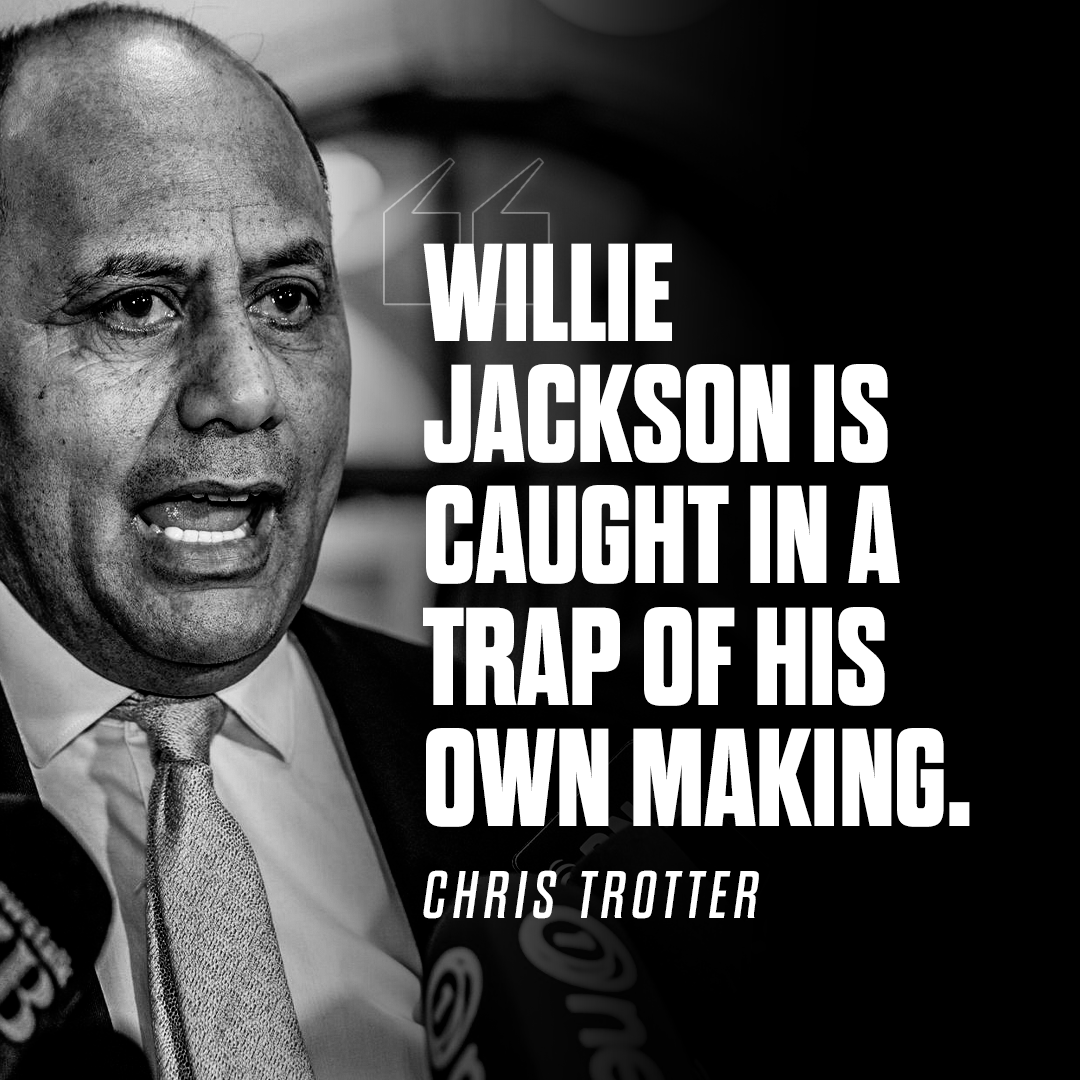 Having previously dismissed the He Puapua report and discrediting the authors by claiming it was not Government policy, he has then set about trying to create a less contentious mark two.

Trying desperately to explain the delays with the new plan, Jackson admits the working group “were a bit off base.”

'Tough Process' To Get Acceptable Co-Governance Draft To Cabinet | Newsroom

At the end of June, when the report was to be released for public consultation, Jackson explained the delays by saying that even he was concerned the report would be thrown out by the Labour Cabinet. In that announcement, Jackson explained “There’s a number of areas we agree on but there’s some other areas that obviously we don’t”.

Here lies the rub, if it is not possible for Maori to reach a consensus agreement on something as foundational as realising “indigenous rights” then how will co-governance work?

The founding assumption in co-governance, a term that this Government still refuses to define, is that Maori, by virtue of shared ancestry, will miraculously agree on the basis that there is some universal or widely held “Maori perspective”.

All it takes is a look at the fighting between the Maori Party and the Labour Maori Caucus to see that there is not one Maori view – and that’s besides the many, many Maori individuals who want nothing to do with that side of politics.

Explanations by prominent Maori voices like Tuku Morgan suggest co-governance will be based upon unanimity. Clearly you can keep talking for months and still be unable to achieve a consensus. The voters can just wait until their self-proclaimed representatives are ready. 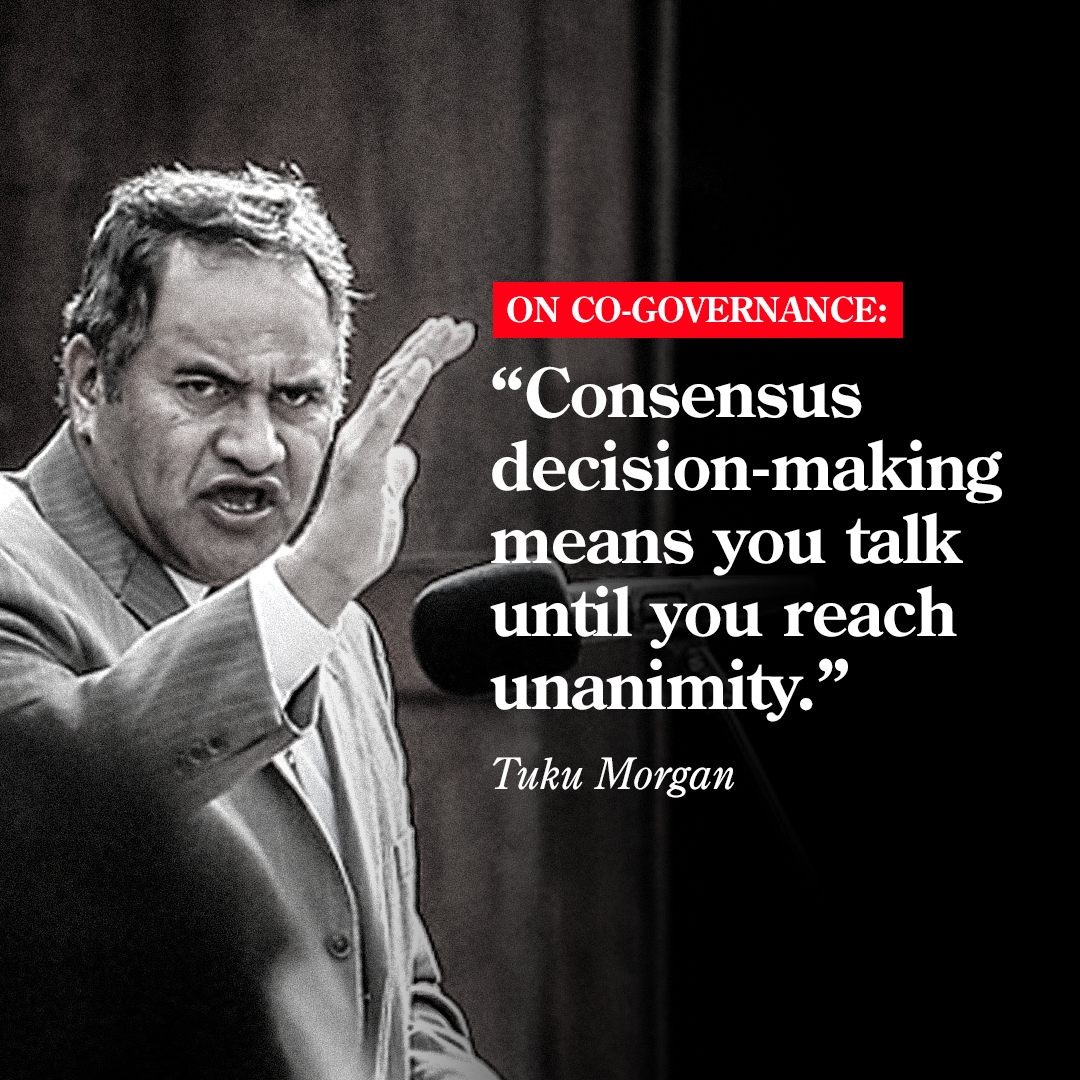 The inability to reach an agreement within Maori is becoming more evident as a self-appointed minority – who claim to speak for all Maori – grapple among themselves for controlling influence. Remember, if you do not agree, you are ridiculed by this Government’s Maori MPs as being “useless” or “not Maori enough.”

If there was any doubt, then this week saw another example of division in the Tuhoe iwi decision-making process around the demolition of Te Urewera backcountry huts. Even Tuhoe kaumatua Paki Nikora, upset by the lack of consultation, joined the petition to stop the destruction of the huts and more gathered for public protest.

Tamati Kruger, the Tuhoe chief negotiator and Tuhoe Te Uru Taumatua Chair, seemed unconcerned about other Tuhoe being unhappy with the action taken. He tried to justify the move by pointing to the poor state of the huts and saying that the $2million per annum provided to maintain the tracks and hut was “miserly”.

Although additional funds were available for Tuhoe to invest in development, the huts were allowed to run into disrepair.

As there is no accountability to the public or transparency for the expenditure, we can never know how the “miserly” $2million per annum since 2014 has been allocated.

Lake Waikaremoana, one of the Great Walks celebrated by locals and tourists for generations, has been noted by those who have visited the track in recent years to have sharply declined since 2014.

“….if there is ever an option, give me the right hut to bed down in any day. I am not…..talking about the impersonal barns that have been built on our great walks and other heavily used tracks, but rather the intimate, remote, carefully sited treasures that can be found all over New Zealand.

“These huts are embedded into my love of tramping. I’ve been in enough wet, miserable, sometimes collapsing tents to appreciate the bulwark that four walls and a tin roof provide in a mountain storm. But it is the simple pared-back hut life I savour, the gentle, comfortable potter of sorting gear, tending the fire, making brews and preparing food and, most of all, the conviviality of spending time with friends, but too, strangers.”

The natural treasures of New Zealand are what gives us the opportunity to unite and come together – destruction should be the absolute last resort.

This destruction-first approach was similarly applied when the public “mountains” of Auckland were clear felled in an effort to “decolonise” by removing non-native trees immediately, rather than waiting for new trees to gain maturity.

If the objective was to create a feeling of exclusion in those who are not in agreement with Mr Kruger from Tuhoe, then it would seem the goal has been achieved. It’s hard to see how we are being encouraged to enjoy the Ureweras, as the destruction of huts continues without any definite plan for construction of alternatives and no requirements at all for accountability to the public.

Co-governance of our natural resources and public services is being justified through a warped interpretation of the Treaty of Waitangi.

This governance model requires democratically elected representatives to achieve consensus with groups or individuals who are appointed to represent Maori interests, without any verifiable mandate or accountability – even to the Maori they are supposed to represent.

This criticism of the legitimate concerns ignores the utter lack of democratic credentials this “partnership” model of governance offers.

The National Party claims co-governance of natural resources as a success and this Labour Government also proclaims victory in the co-governance they’ve slipped into the management of Three Waters and the implementation of Pae Ora health reforms. Both are dead wrong.

Through the absence of transparency, accountability and democratic process in co-governance, we are delivering enormous power to a small number of individuals who we are expected to believe will act in the best interests of us all.

Those advocating for change in how our natural resources and public services are managed like to disparage democracy as being the “tyranny of the majority,” but the alternative we are offered is just a direct swap to tyranny by an unaccountable minority, who are generally unable to demonstrate support from Maori collectively.

With less than twelve months to the next general election, it will be critical to challenge this misleading rhetoric, which seeks to justify division at every opportunity.

In January this year, a Curia Research poll found that 72 percent of voters considered New Zealand more divided than a year ago. It looks likely the dial will have shifted further this year.

It shouldn’t be necessary to say, but co-governance is not a success and 35 years of “partnership” posturing has entirely failed to improve outcomes for Maori.

And back 35 years ago, we were the nation that proclaimed to the world that in New Zealand, we were one people on the water and one people on the land. A simpler time, with better outcomes delivered than now. The difference is striking. 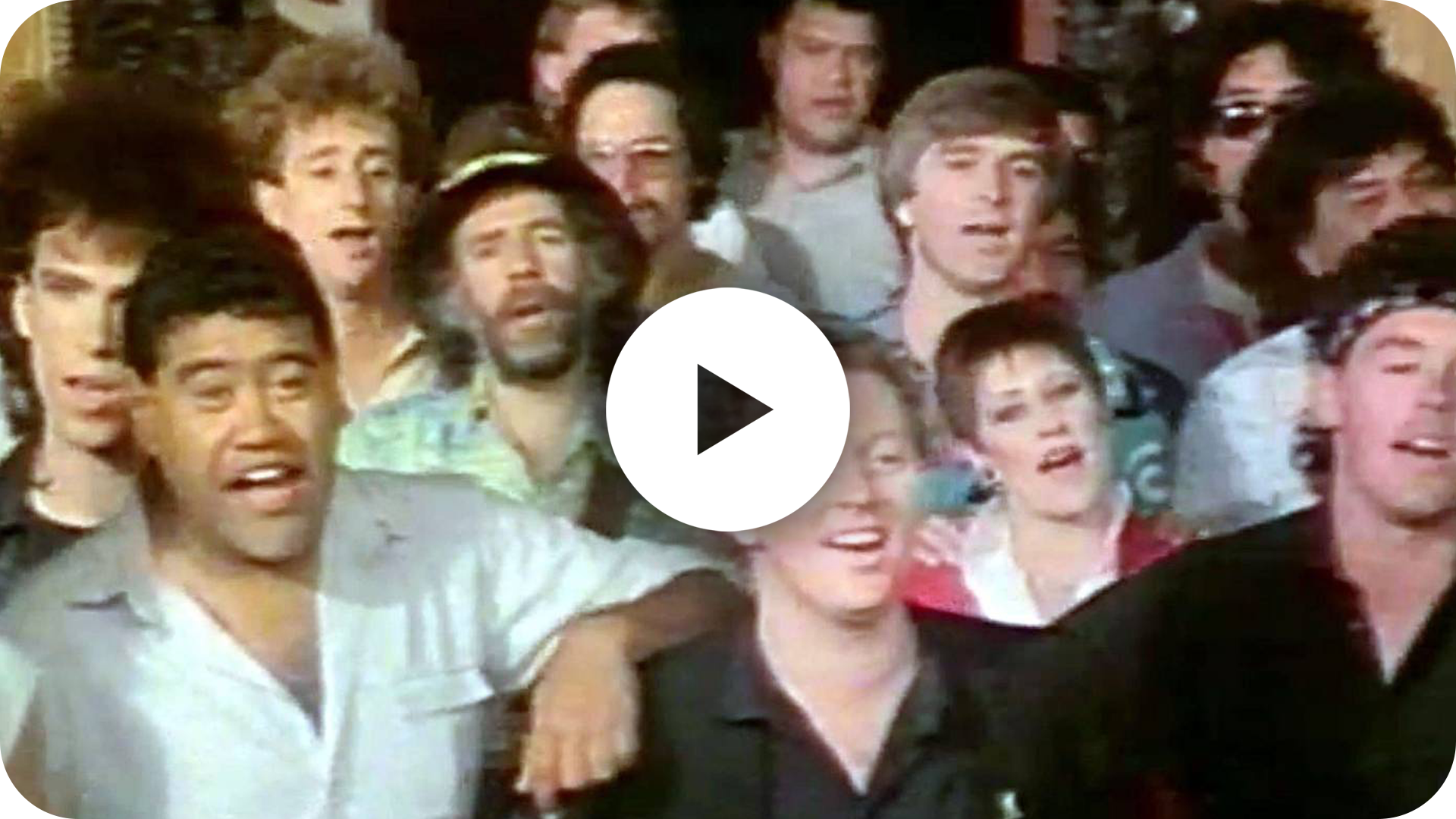 Your support allows us to continue to demand greater accountability from Government and I encourage you to share this message so that we can end racism and unify New Zealanders, while protecting our democracy.

Thank you for your support.