About 200 people attended the Hobson's Pledge public meeting in Tauranga on Tuesday, November 22, at the Hotel Armitage.

The standing room only meeting demonstrated the level of concern that exists with the current direction of National away from a democratic and equal New Zealand.

Auckland business manager Casey Costello quoted Maori leader Sir Peter Buck, who said “Beware of separatism. The Maori can do anything the Pakeha can do. But in order to achieve this we must all be New Zealanders first.”

The full text of Casey’s speech may be read at http://www.hobsonspledge.nz/casey_costello_public_meeting_t…

Former National Party leader Don Brash said that Hobson’s Pledge would “protest as loudly as we know how every time the Government proposes that laws give some kind of political preference based upon ethnicity”.

He said that the National Party led Government is putting iwi above Kiwi in refusing repeated offers from NZ First to get reforms to the Resource Management Act through Parliament.

You may not be aware that we have a Facebook page, and this page has been the centre of energetic debate on the 10 points promoted by Hobson’s Pledge. You may visit this page at https://www.facebook.com/hobsonspledge/

Cartoon says it all

Garrick Tremain summed the issues concisely in a cartoon published in late September, when Hobson’s Pledge was launched. 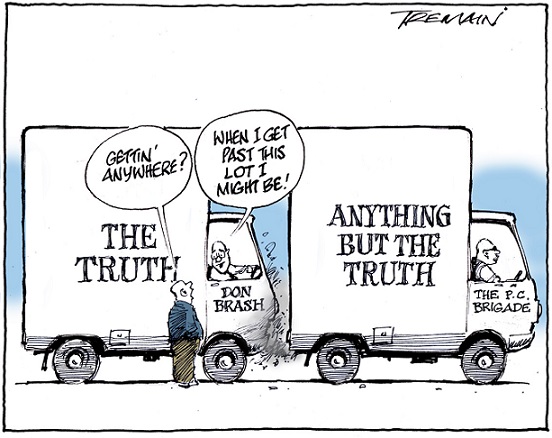 Our website at http://www.hobsonspledge.nz/ lists the 10 points of the Hobson’s Pledge manifesto. It also has 10 pages detailing animist beliefs, indoctrination, the iwi participation clauses in amendments to the Resource Management Act, a history of Maori seats, the three main texts of Treaty of Waitangi, treaty settlements (listed with financial redress amounts), the push to tribalise local government, reasons to disestablish the Waitangi Tribunal, and whether tribal businesses should have a tax exemption.

Grow the movement. Forward "Hobson's Update" to your friends and family