Notification of 150 claims for ownership of thousands of kilometres of our coastline filed in the High Court were advertised over the past week with 20 days for anyone to object. 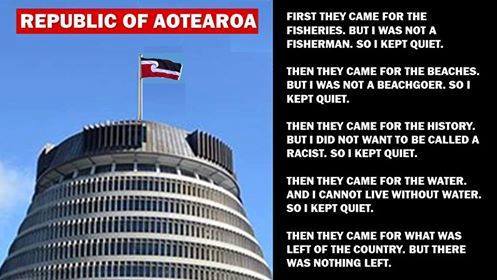 The claims, under the Marine and Coastal Area Act 2011, had to be filed within six years of the date of the Act. The Crown has been negotiating directly with those the Crown thinks likely to have well-founded claims.

The Act allows claimants to gain customary marine title if they can show that they have exclusively occupied and used the foreshore and seabed since 1840.

Objectors simply have to provide evidence of occupation and use of the various coastal areas by those other than the claimant group.

Customary marine title gives the right of veto over development, the ability to charge fees for use of slipways, wharves, aquaculture areas, and marinas, and exclusive rights to mine iron-sand and minerals. There are fines of up to $5000 for those who go there without permission.

If objections are not lodged it is likely the court will cave in to the opportunist claims.

Hobson’s Pledge says it defies logic that any New Zealand government would consider giving away control of extensive marine areas to a number of individuals simply because they asked for it.

Calls for the compulsory teaching of the Maori language ramped up during the week with former Maori Affairs Minister Pita Sharples asserting that Te Reo should sit "a little bit in front" of other core subjects such as maths and English, and be learned by all students.

ACT leader David Seymour said making the language compulsory risks making it unpopular, adding that suggestions the language was dying were wrong, as he knew many people across "middle class New Zealand" signing up for free Te Reo classes.

Hobson’s Pledge says that there are higher priorities for the limited Vote Education budget than Te Reo and activists are putting politics above rational educational policy.

Councils are required by legislation to consider setting up Maori wards every six years.

Consultation will be held in August and September. After hearing submissions, the council would make a decision in October. Its decision could be challenged if 5 per cent of voters demanded a poll.

The Hastings District Council decided against Maori wards earlier this month after the council’s Maori committee recommended against the proposal. Four of Hastings’ 14 councillors have Maori ancestry.

Don Brash and Casey Costello will speak in Nelson at 7pm on Tuesday, May 2, at the Rutherford Hotel, Trafalgar St, Nelson.