The Treaty of Waitangi and us 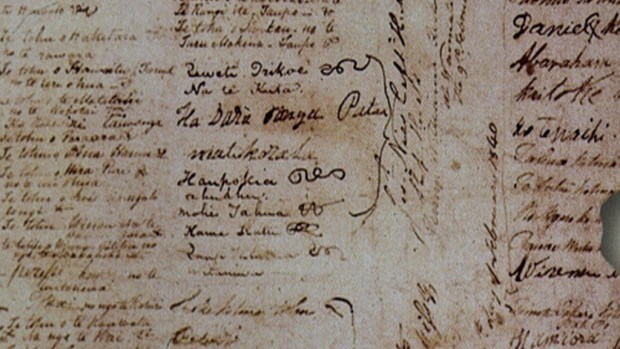 The first four core beliefs set out on our Homepage of this website are to do with the Treaty of Waitangi. Our beliefs are that:

This article gives a brief background to clarify the complicated issues surrounding the Treaty of Waitangi. We reproduce its three key texts, and show that all the Treaty actually says is that the Queen is sovereign and Maori are her subjects, with the rights of subjects, including the right to possess property.

A total of 512 chiefs, including 13 women, signed the nine copies of the Treaty at 34 locations around New Zealand between 6 February and 17 June 1840. The documents signed were written in the Maori language.

At the time, New Zealand was still part of New South Wales. It wasn’t until November 16, 1840, when the Letters Patent (commonly known as the Charter of 1840) was signed by the Queen, that New Zealand became an independent British colony.

The only signing at which an English text was incorporated was at Waikato Heads mission station on 11 April 1840. Five chiefs signed an A4-sized printed Maori text which was attached to an English text written on a large sheet of paper, and this large sheet was signed by a further 39 chiefs.

The larger piece of paper that had a Treaty text in English on it with a wobbly signature by Governor William Hobson, appears to have been used solely to collect the 39 chiefly signatures. These two texts were separated at some time and the English text was taken to be the official English text.

Problems associated with understanding the Treaty are 1. Differences between the official English text and Te Tiriti, and 2. The translation of the words “sovereignty” and “ownership”.

At 568 words, the official English text is much wordier than the 480-word Te Tiriti. The differences between the two texts led scholars to conclude that the final draft of the treaty in English had gone missing.

The apparent differences between the English and Maori texts and the use of the words “kawanatanga” and “rangatiratanga” remained uncontroversial until 1983, when the Waitangi Tribunal looked into claims by Te Atiawa about the discharge of untreated sewage at Motunui in Taranaki. The Motunui report rediscovered the Maori language text of the Treaty.

This created a Treaty that claimants say gave the Governor limited authority to govern British settlers only while chiefs could carry on being chiefs, retaining the right to govern themselves.

A further development occurred in 1989 with the discovery by the Littlewood family of a handwritten 386-word document in an envelope marked “Treaty of Waitangi”. Analysis confirmed that:

There is just one word that differentiates the Busby February 4 1840 Littlewood text from Te Tiriti and that is the inclusion of the word “maori” yes, lower case “m”, in article 3 to clarify that the ordinary people of New Zealand would be protected by the Queen and be granted the rights and privileges of British subjects.

It is helpful to publish the English and Maori texts in sequence for comparison, starting with the Busby February 4, 1840, draft, followed by Te Tiriti and the so-called “official English text”, both of which are appended to legislation.

Her Majesty Victoria, Queen of England in her gracious consideration for the chiefs and people of New Zealand, and her desire to preserve them their land and to maintain peace and order amongst them, has been pleased to appoint an officer to treat with them for the cession of the Sovreignty [sic] of their country and of the islands adjacent to the Queen. Seeing that already many of Her Majesty’s subjects have already settled in the country and are constantly arriving: And that it is desirable for their protection as well as the protection of the natives to establish a government amongst them.

Her Majesty has accordingly been pleased to appoint me William Hobson a captain in the Royal Navy to be Governor of such parts of New Zealand as may now or hereafter be ceded to Her Majesty and proposes to the chiefs of the Confederation of United Tribes of New Zealand and the other chiefs to agree to the following articles.-

The chiefs of the Confederation of the United Tribes and the other chiefs who have not joined the confederation, cede to the Queen of England for ever the entire Sovreignty [sic] of their country.

The Queen of England confirms and guarantees to the chiefs and the tribes and to all the people of New Zealand, the possession of their lands, dwellings and all their property. But the chiefs of the Confederation of United Tribes and the other chiefs grant to the Queen, the exclusive rights of purchasing such lands as the proprietors thereof may be disposed to sell at such prices as may be agreed upon between them and the person appointed by the Queen to purchase from them.

In return for the cession of their Sovreignty [sic] to the Queen, the people of New Zealand shall be protected by the Queen of England and the rights and privileges of British subjects will be granted to them.

Now we the chiefs of the Confederation of United Tribes of New Zealand assembled at Waitangi, and we the other tribes of New Zealand, having understood the meaning of these articles, accept them and agree to them all. In witness whereof our names or marks are affixed. Done at Waitangi on the 4th of February, 1840.

The single variation between the Littlewood and Maori texts is the addition of the word “maori” in article 3, to clarify that the ordinary people of New Zealand, not just the chiefs, would be protected and be granted the rights and privileges of British subjects.

HER MAJESTY VICTORIA Queen of the United Kingdom of Great Britain and Ireland regarding with Her Royal Favour the Native Chiefs and Tribes of New Zealand and anxious to protect their just Rights and Property and to secure to them the enjoyment of Peace and Good Order has deemed it necessary in consequence of the great number of Her Majesty’s Subjects who have already settled in New Zealand and the rapid extension of Emigration both from Europe and Australia which is still in progress to constitute and appoint a functionary properly authorized to treat with the Aborigines of New Zealand for the recognition of Her Majesty’s Sovereign authority over the whole or any part of those islands – Her Majesty therefore being desirous to establish a settled form of Civil Government with a view to avert the evil consequences which must result from the absence of the necessary Laws and Institutions alike to the native population and to Her subjects has been graciously pleased to empower and to authorize me William Hobson a Captain in Her Majesty’s Royal Navy Consul and Lieutenant Governor of such parts of New Zealand as may be or hereafter shall be ceded to her Majesty to invite the confederated and independent Chiefs of New Zealand to concur in the following Articles and Conditions.

Her Majesty the Queen of England confirms and guarantees to the Chiefs and Tribes of New Zealand and to the respective families and individuals thereof the full exclusive and undisturbed possession of their Lands and Estates Forests Fisheries and other properties which they may collectively or individually possess so long as it is their wish and desire to retain the same in their possession; but the Chiefs of the United Tribes and the individual Chiefs yield to Her Majesty the exclusive right of Pre-emption over such lands as the proprietors thereof may be disposed to alienate at such prices as may be agreed upon between the respective Proprietors and persons appointed by Her Majesty to treat with them in that behalf.

In consideration thereof Her Majesty the Queen of England extends to the Natives of New Zealand Her royal protection and imparts to them all the Rights and Privileges of British Subjects.

Now therefore We the Chiefs of the Confederation of the United Tribes of New Zealand being assembled in Congress at Victoria in Waitangi and We the Separate and Independent Chiefs of New Zealand claiming authority over the Tribes and Territories which are specified after our respective names, having been made fully to understand the Provisions of the foregoing Treaty, accept and enter into the same in the full spirit and meaning thereof: in witness of which we have attached our signatures or marks at the places and the dates respectively specified.

Done at Waitangi this Sixth day of February in the year of Our Lord One thousand eight hundred and forty.

Sharp-eyed readers will note that, strictly speaking, the official English text was not “done at Waitangi this Sixth day of February”, as the postscript reads, because the only treaty signed that day was the Maori text.

Great Britain’s vast empire in the 19th century brought contact with “natives” in numerous regions around the world. Enlightened attitudes in London on the rights of such inhabitants led to the practice of arranging treaties of cession rather than simply taking over the country by force.

The Treaty of Waitangi in New Zealand resulted from a number of drafts in which a standard treaty format was adapted to suit the New Zealand situation.

The high-sounding “official English text” taken from the first schedule to the Treaty of Waitangi Act 1975 resembles the rough draft notes of Busby’s rejected 3 February draft, which omitted a reference in Article 2 to “all the people of New Zealand”.

Because the Treaty was drafted in English and translated into Maori, the meaning and intent of the Treaty is clearly apparent in the English source document.

This means that there is no need for the Waitangi Tribunal to interpret the treaty for us.

The scope of the Treaty is too narrow to be regarded as New Zealand’s constitution. A constitution is a body of established precedents according to which a state is acknowledged to be governed. The Treaty only concerns the cession of sovereignty and confirmation of the rights, as British subjects in the 19th century, which includes the right to possess property

And finally, the Treaty has no mention of any partnership between “Maori” and “the Crown”. None of the three texts has anything that could be construed to mean “partnership”.